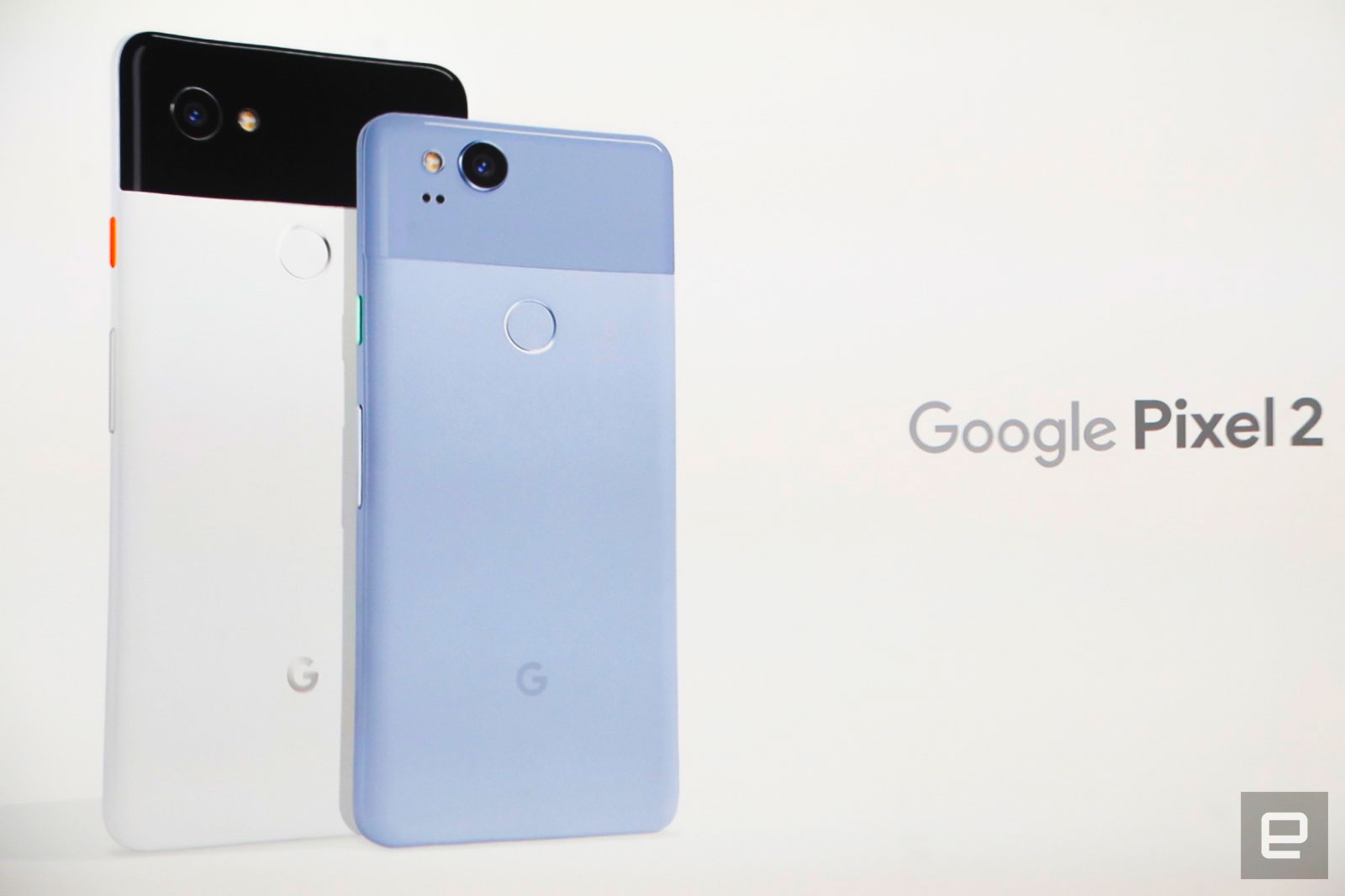 As expected, the Pixel 2 and Pixel 2 XL are vastly improved from last year’s models. The 3.5mm headphone jack is gone, just like the iPhone, but the 5- and 6-inch smartphones feature a 2.35Ghz Snapdragon 835 processor, 4GB of RAM, a 12.2-megapixel sensor with a f/1.8 aperture stereo speakers, Bluetooth 5.0, and 2700 mAh and 3520 mAh batteries, respectively.

Pre-orders open today, with the Pixel 2 shipping by October 17th. The Pixel 2 XL, however, might take between five and six weeks to reach your doorstep.

If the Google Home is the search giant’s answer to the Amazon Echo, the new Home Mini is its answer to the Echo Dot. The puck-sized, fabric-covered device doesn’t feature the same music-grade speakers found in its bigger counterpart, opting instead to concentrate on Google Assistant voice commands.

As you’d expect, the Home Mini comes with a lower price tag. Should you opt for one of the three different colour variants — chalk, red and slate — you can expect to pay £49, the same price as Amazon’s Dot. You can pre-order right now and it’ll ship by October 17th.

The Home Mini wasn’t the only new speaker announced today. Instead of opting for dedicated voice smarts, Google decided it needed a speaker “built for sound.” The Max will automatically tune itself to your space and adjust itself depending on the song. Thanks to its dual 4.5-inch high-excursion woofers and two custom tweeters, the Max is a whopping 20 times louder than the standard Home. Given that they can also be paired in stereo, Google isn’t just going after Amazon, it’s also setting its sights on Sonos.

The Home Max will come in two colours: chalk and charcoal. However, the speaker will only be available in the US when it debuts in December. You can expect to pay around £399 when it does make its way to the UK, given the close parity between the pound and the dollar.

It appears Google isn’t done with premium Chromebooks. The Pixelbook is a mix between the Chromebook Pixel and Pixel C, existing as a 2-in-1 machine that can be folded around and used like a tablet. The company claims the 12.3-inch device this is its thinnest laptop ever, coming in at just 10 millimetres thick. It also weighs just 2.2 pounds or 1 kilogram.

The Pixelbook has plenty of power too. It’s powered by Intel Core i5 and i7 processors and can be configured to host up to 512GB of storage and as much as 16GB of RAM. The Pixelbook Pen can circle things on the screen and the Assistant will give you more info and links to other relevant pages.

Google’s new Pixel phones drop the headphone jack (boo), so of course the company has some Airpod-style wireless buds to go with them. The Pixel Buds will cost you £159 and come with simple touch-based gesture controls for playback and hands-free calls. They’ll also give you quick access to the Google Assistant and real-time translations, which in theory sound like a godsend for frequent travellers. Like the Airpods, they’ll come with their own charging case and a quick pairing feature for Android phones running Marshmallow or higher. There’s currently no details on pre-orders but Google expects to begin shipping Buds from November.

Lifelogging isn’t dead, at least according to Google. Google Clips looks like any other wearable camera, but Google’s crammed in a ton of its AI tech to get the most from its own. The idea is you set it somewhere (or clip it to you) and it’ll “look” for great moments to take photos and small videos using machine learning algorithms.

Google Clips is currently listed as “coming soon” in the US with a $249 price tag. However, it doesn’t look like it’ll make its debut in the UK for a while.