What Made Forza the ‘Perfect Partner for Porsche’

Way back in August 2011, one of the very first articles I wrote for IGN concerned the surprise absence of Porsche in Forza Motorsport 4 (which, up to that point, had been a staple of the series). “This kills me,” lamented Turn 10 creative director Dan Greenawalt at the time, before going on to explain the situation.

The particular reason for this has been discussed at length both here and elsewhere over the past decade-and-change, but the short story is: it’s no longer an issue, and hasn’t been since the turn of the new year.

Porsche, as a brand, has been at the heart of Forza for a long time.

Cut to almost six years later and the tune has changed dramatically. At last month’s New York International Auto Show Porsche and Turn 10 Studios announced a six-year partnership between the iconic German marque and Forza. Porsche will still appear in other racing games too, but gone are the days of having to wait months after release until the Forza team were permitted to release Porsche expansions. Greenawalt agrees that this is a much nicer conversation to be having.

“Absolutely,” he says. “Porsche, as a brand, has been at the heart of Forza for a long time.” 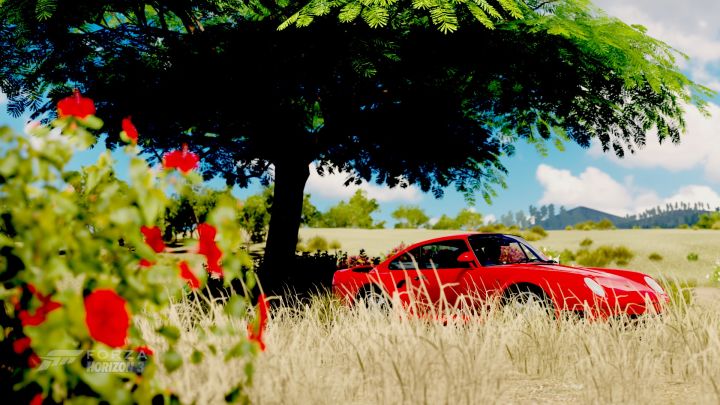 The iconic Porsche 959 in Forza Horizon 3.

Greenawalt believes the teams at both Forza Motorsport developer Turn 10 and Forza Horizon lead studio Playground Games have been able to deliver great Porsche experiences in the post-release expansions that have come to most Forza games since FM4, but this new partnership is going to change things for the better. According to Greenawalt the recent Porsche content for Forza Horizon 3 and esports activity in Forza Motorsport 6 is really “just the tip of the iceberg.”

“Things are just going to accelerate and accelerate from here,” he says.

Despite only having access to the Porsche license at arm’s length for many years Greenawalt confirms the Turn 10 team has maintained a very good relationship with the manufacturer.

Interestingly enough, we’ve had really good access at Porsche over the years.

“Interestingly enough, we’ve had really good access at Porsche over the years,” explains Greenawalt. “It was difficult to deliver something, maybe, the day we wanted to or what have you – but the access was fantastic.”

“So the experience we delivered in Forza Motorsport 6, for example, with that expansion: you got the hear the voices of the drivers, you got to hear very authentic experiences, including being able to drive cars in track pairings that anyone who loves Porsche and loves motorsport would honestly recognise and be incredibly enthusiastic about.

“So, yes, we do have more access now, but what’s more exciting for me is that we can deliver experiences both in-game as well as outside-of-game.”

Cruising through Surfers Paradise in the new Porsche 918.

This is where Forza’s esports focus comes into focus, with Greenawalt confirming over the last seasons of the Forza Racing Championship they’ve had over 30,000 participants. Last month the Forza team also held a live invitational Forza Racing Championship event at Microsoft’s flagship New York store where 18 of ForzaRC’s top racers competed for a shot at USD$25,000 in cash prizes. Next month, the final event of the third season of the Porsche-themed Forza Racing Championship will be hosted at Le Mans – during the world-famous 24-hour endurance race. Racers will jockey for a slice of a USD$100,000 prize pool and the winner will be awarded the trophy on the same podium the real-world drivers receive their trophies on.

So, how is Forza’s new Porsche partnership different from the previous partnerships the Forza teams have revealed and discussed over the last few years, like those with Ford and Lamborghini?

“Well, I can’t get into the specifics of the future, but what I can tell you about is a little bit of the past, which I think will illuminate it,” says Greenawalt. “The very first Forza Motorsport – when we were building it, we had not yet announced it. We just had a prototype track and we were trying out our physics with various cars.”

Long story short, this type of partnership is as much in our wheelhouse as it is in Porsche’s wheelhouse.

“One of the very first cars we were experimenting with was a 1973 911 Carrera RS. Vintage tyres, its unique technology, rear-weighted – it was a car that was going to test our physics system. So that car is near and dear to Forza’s heart. And even as we got into Forza Motorsport 3 and you look at the UI of that game, that UI was actually ideated… in concert with looking at Porsche brochures. So Porsche’s at the very heart of how we’ve done our creative process on the team. Long story short, this type of partnership is as much in our wheelhouse as it is in Porsche’s wheelhouse.

“What’s even more exciting, though, is the way that Porsche builds community. This is something very unique to Porsche. And we build community on the gaming side that’s very unique to us, and I think that’s going to colour the partnership in ways that it never has been with any other manufacturer, because this is about communities, and giving authentic experiences to communities both in the real world, and in our virtual world. So, yes, we’ll share technology; we’re good at that. We have tremendous race engineers that we can work with at Porsche and we have great engineers on our team. We’ve done that, we’ll do that, it’s gonna be great. It’s the community that we build that’s going to be the most lasting impression of the six-year partnership.”

Nobody calls me yellow.

After so many years under EA’s hat, Porsche’s new six-year deal with Forza may be an eyebrow raising one. Turn 10 wasn’t seeking exclusivity, however, and Porsche will still continue to join a horde of new non-EA racing games. According to Greenawalt the length of the partnership is really about signalling that this is a long-term relationship.

“I think what it really does is signal that’s it longer term than one year,” says Greenawalt. “So if you look at a traditional marketing partnership; you can do that in one year and it might be executed around, let’s say, one car, one game launch, or something like that.”

“The goal of the six years is less about that specific number, but that it’s much greater than three, four, or five. It forces us to be looking at how we build experiences and community, rather than individual stories for an individual month or quarter. So the statement should be less about the number and more about the intent of building something lasting.”

Porsche will be appearing in a host of racing games this year, but Scott Baker of Porsche North America explains what it is about the Forza series that made this specific partnership an attractive one.

“I think that Dan touched on it,” says Baker. “You can look at the esports environment and what Forza has cultivated and it’s very much an enthusiast group that is highly engaged with the overall experience.”

[I]n March, we had four million active players in the Forza community. That makes it one of the largest racing communities in the world.

“And it’s extremely akin to Porsche’s enthusiast community, and one that likes to come together, likes to communicate, likes to share experiences, but also likes to compete. And any time you bring together a community of the nature that Forza has – which made them extremely attractive and I think the perfect partner for Porsche – with our history with motorsport [and] the lineage behind our cars, which is extensive, you need time to be able to play out that story.

“I think that the enthusiast nature of those communities demands experiences, evolution and engagements that they can really sink their teeth into. Doing that over one year or two years? I don’t think you can really deliver on what both communities – ours at Porsche and that at Forza, really deserves.”

“It’s probably worth noting that just this last month, in March, we had four million active players in the Forza community,” adds Greenawalt. “That makes it one of the largest racing communities in the world. And it’s a very diverse group, as you would know.”

“There are players that play in Horizon, they play in Motorsport, and now we’re on PC – Windows 10 with Forza Horizon 3 as well as with Apex. So we’ve got a platform that is really difficult to replicate… We can talk to four million people in a way that you just can’t do with anything else. They can actually play the cars; they can listen to the drivers. They can get a real experience in there.

“I think that’s something that can’t be undervalued, what Forza’s built over time.”

Luke is Games Editor at IGN’s Sydney office. You can find him on Twitter @MrLukeReilly.