What Is your security camera missing?


This footage gap first came to my attention when reviewing the original Netgear Arlo Pro for our wireless outdoor home security camera guide. I went back and retested the unit, only to find that, on average, the camera left gaps up to 35 seconds in between recordings. In one recording, enough time elapsed between clips to leave me wondering which one of my neighbors was kind enough to put my trash cans away. It’s also long enough to miss someone breaking into your home or stealing a package from your porch.

When I asked Netgear about the issue, a representative stated that this was put in place so the camera sensor could reset, so the video wouldn’t be stuck in a loop and kill the battery. They also said the company planned to fix it by adding a “record until motion stops” feature, which was included on some of the company’s AC-powered cameras. Once the camera was updated, the gaps still remained, but were shorter and slightly more consistent in duration.

This got me wondering about other cordless, battery-powered cameras. But after a bit more research and testing, I realized that some cameras connected to AC power still left gaps anywhere from a few seconds and up to five minutes. When it comes to choosing a camera for security, this is a big deal.

A few manufacturers have acknowledged that by allowing you to adjust the downtime. For instance, Blink allows users to set the retrigger time on the outdoor XT between 10 and 60 seconds. Blink says this feature helps to conserve battery life, but that doesn’t explain why so many corded cameras also do this. 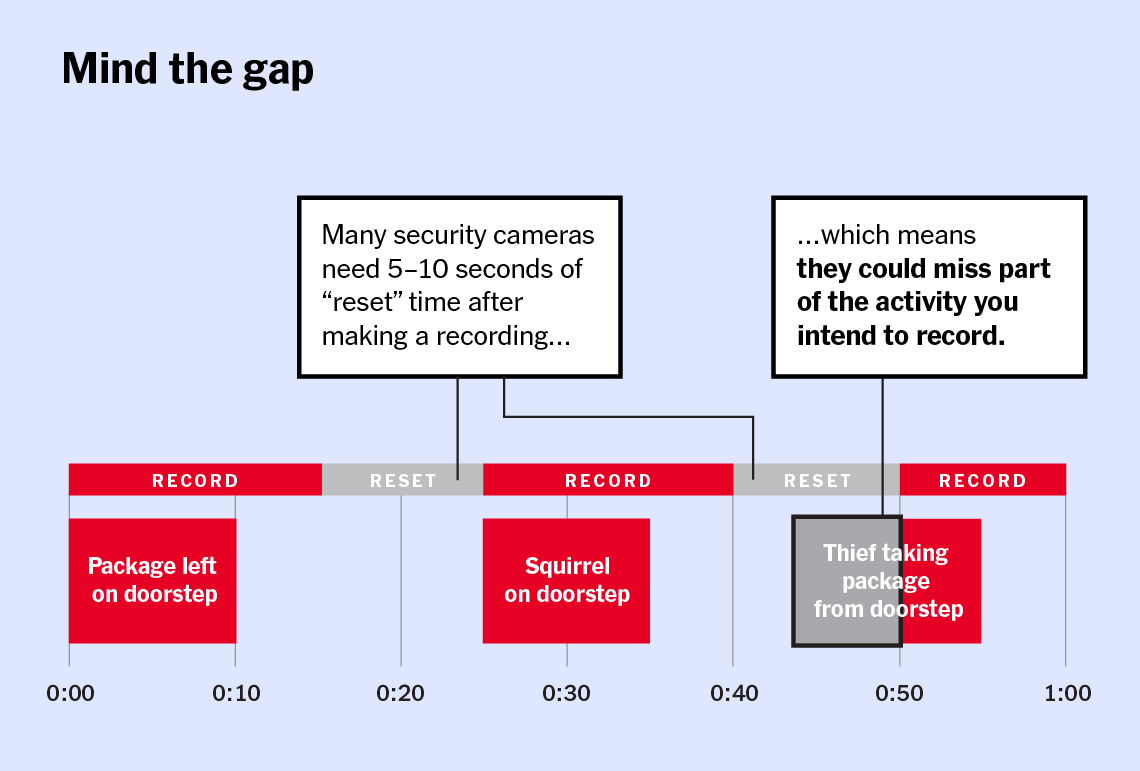 Wi-Fi cameras often cut off recordings after a predetermined time, then leave a gap in between clips. Image: Ryan Hines

Having that reset can ensure that the camera isn’t making endless recordings triggered by people, cars, or animals. Of course, recent features like defined activity zones and person detection are better ways to address that problem.

Nest, Logitech, and Amazon are a few of the companies currently making cameras that don’t leave any sort of a gap. Logitech cuts off clips a little after three minutes, but uses a “per frame tracking approach” to start a new clip immediately. Amazon bumps clips up to five minutes and “records a few seconds of video in temporary storage on the device and continually writes over it” to make sure you never miss any of the action. Nest just records everything 24/7 and makes a note when motion occurs—and charges from $50 to $300 a year for it.

Why might you be willing to live with the gaps? Price is definitely a consideration. Nest cameras and Logitech’s Circle 2 cost two and, in some cases, three times more than other security cameras. At $120, the Amazon Cloud Cam is more affordable, but has trade-offs on image and features.

Another reason you may be willing to live with gaps is convenience. This is especially something to consider with outdoor cameras. If you don’t have an outside outlet, you may be willing to accept gaps in exchange for a cordless camera. With almost 12,000 reviews and a 4.3-star (out of five) rating on Amazon, Arlo Pro users don’t seem too concerned with missing a few seconds here and there.

If you’re worried about not catching something (or someone), setting up a system with multiple overlapping cameras may help. This is what pro security companies do, but that gets expensive.

Before buying, think about how you’re going to use the camera. If it’s for live viewing, watching the dog, or checking to see when the kids get home, recording gaps might not matter. Plus, it’s just a few seconds, right?

This blog may have been updated by Wirecutter. To see the current content, please go here.

Previous How and Where to Preorder Call of Duty: Black Ops 4
Next Best LGBT dating apps for iOS and Android