“Looks like it took them a while to get to all of my accounts.”

By Peter Clark and Joe Skrebels

Update 07/16/2018: PleaseAddAntiCheat, the anonymous player that hacked Splatoon 2’s leaderboards to ask for an anti-cheat solution, has seemingly been banned from online play indefinitely.

Posting on Reddit, the user posted the notice from Nintendo regarding their ban, and wrote: “Looks like it took them a while to get to all of my accounts. But can confirm my console is now 2124-4027 [the error code used on Switch to say that online services have been restricted].”

The initial leaderboard hack has also now been removed. IGN has contacted Nintendo for comment.

For those who don’t know Splatoon 2 has a cheating problem, they can currently find out at the top of the leaderboards.

One ethical hacker took it upon themselves to cheat their way to the top of Splatoon 2 charts this week to post a sincere message to Nintendo about the game’s exploits.

The player edited their X Power number, a ranking system within the competitive squid shooter, in four different match types. There they wrote out the plea to Nintendo: “Please Add Anti Cheat”. 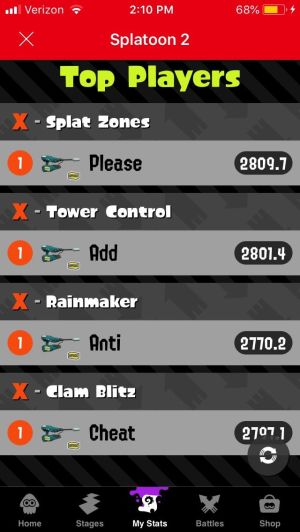 On the Splatoon subreddit, one person with the username PleaseAddAntiCheat took credit for the hack, offering proof of their ranking.

“Splatoon 2 is a game that I love so very deeply… However, this will not be true as long as there are cheaters lurking around,” they wrote in a comment. “I figured that someone needs to deliver a message to Nintendo… Nintendo, you’re welcome to ban my console any time. My purpose was to call attention to the current issue that plagues the game, and I’ve done that. But my message is, please make protecting your players the top priority.”

Peter Allen Clark is a freelance writer who has spent way too much time wondering about the genetic make up of the squid kids, and what type of world they live in that would bring about their evolution. Follow him on Twitter to see him slowly lose his mind over this.