But don’t worry: Even if you hate the trackpad, there’s always the reliable (if somewhat anachronistic) TrackPoint. Over the years, pointing sticks have fallen out of favor as touchpads have steadily improved. Even I shun it most of the time. But I have to say that using it is still a pleasure. And it has the added bonus of causing waves of nostalgia to wash over me every time I touch it. I’m not going to give up the trackpad life to return to a pointing stick, but I’m glad it’s here.

You’ve also got options when it comes to ports. There’s a veritable glut here that simply outclasses the competition. On the left side, you’ll find Lenovo’s proprietary charging and networking connections, two USB-C ports with Thunderbolt 3 support, full-sized HDMI and a headphone jack. On the right are two USB 3.1 sockets plus an SD card slot. (There’s also room for a smart card reader, but I’m pretty sure nobody actually uses those.)

Now, you can power the X1 Extreme over USB-C in a pinch. But, I highly recommend you use the 135-watt AC adapter that comes in the box instead. With that, you can get the battery to 80 percent in about an hour. Over USB-C it took several minutes just to add a single percentage point — so I’d expect it to take well over two hours to charge completely.

I also had some issues charging one of the two review units I tested. It just refused to recharge unless it was completely powered off. I left it plugged in overnight, with the lid closed, but in sleep mode. When I woke up, the battery still only had 46 percent. Factory-resetting the device seemed to fix the problem and the second unit charges just fine. But I’d be lying if I said it didn’t immediately bring back bad memories of my X1 Carbon. 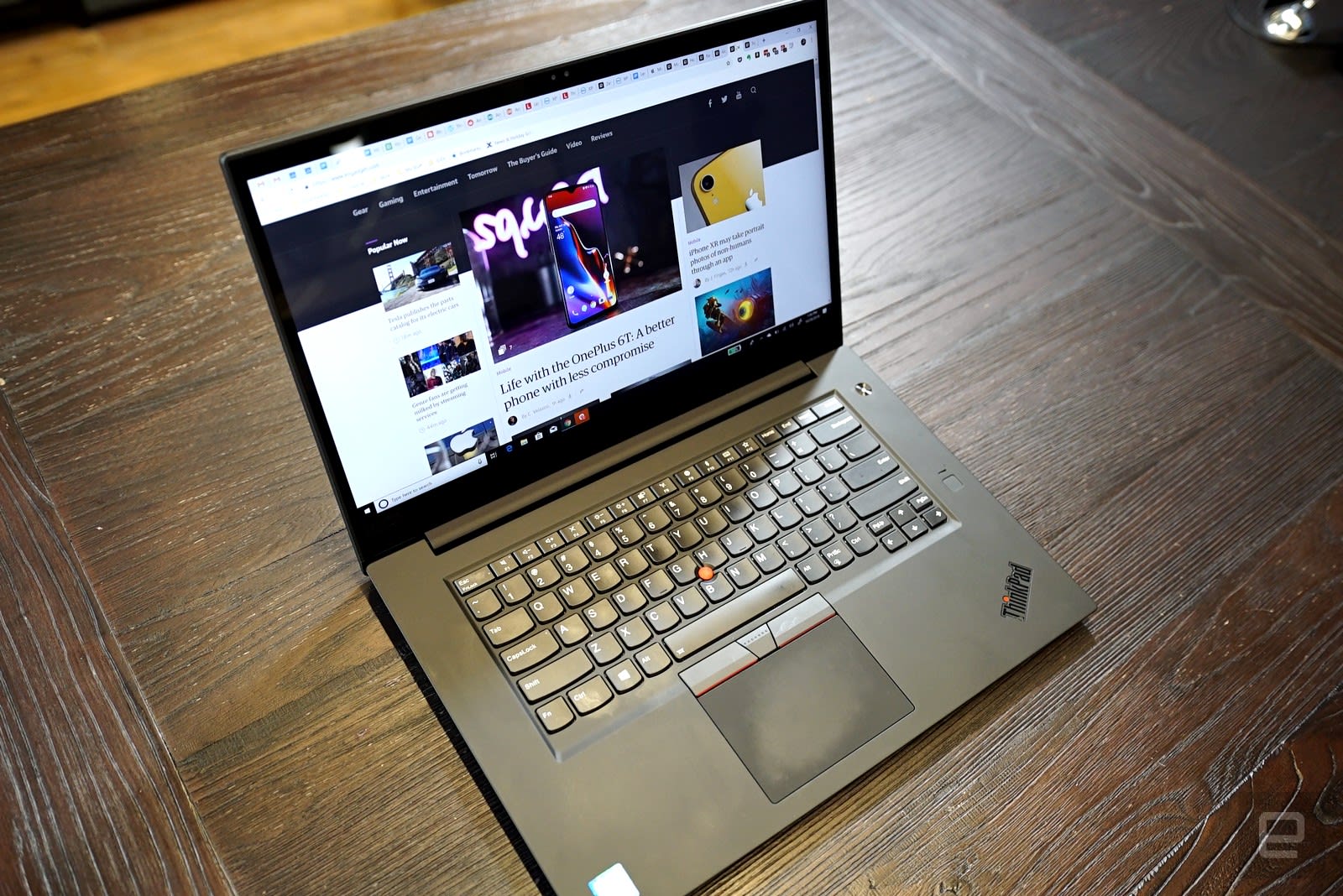 Frankly, you shouldn’t wander very far from your AC adapter anyway. Lenovo’s track record on battery life has been hit and miss these past few years and the X1 Extreme is definitely a miss. Lenovo claims you can get up to 15 hours out of it, but I find that impossible to believe. That is, unless you opted for the lowest-spec model, turned the screen brightness all the way down and left it sitting in a corner untouched. In our standard battery test — looping an HD video at 65 percent brightness until the laptop shuts down — it lasted just six hours and 16 minutes.

We haven’t been able to run our battery test on either the XPS 15 or 15-inch MacBook Pro yet, so we don’t know just how far short the Extreme really falls. But, the Dell comes with a 97WHr battery, compared to the ThinkPad’s 80. And while Apple is more conservative, promising only “up to 10 hours”, the company also tends to be pretty accurate with its battery life estimates. That being is said, the X1 Extreme did last longer than the ZenBook Pro 15.

Of course, part of the reason the battery here dies so quickly is that under the hood are some seriously powerful components. Our review unit has a Core i7-8850H CPU, 32GB of RAM and a GeForce GTX 1050 Ti GPU with 4GB of video RAM. And all of that horsepower is pushing pixels to a gorgeous 15.6-inch 4K HDR touchscreen that supports 100 percent of the Adobe RGB color gamut. In short, this is probably more laptop than most people need.

Still, I appreciated all that power. And so too will anyone who does a lot of photo or video editing, or music production. Until recently I’d been relying on a five-year-old MacBook Air and that 2014 X1 Carbon I mentioned earlier. So it’s refreshing that changing rooms in Slack doesn’t bring my computer to a crawl. Now, my normal workload isn’t nearly enough to tax the X1 Extreme. Dozens of Chrome tabs, Slack, Evernote, Spotify, Todoist and Photoshop all running simultaneously didn’t cause the system to blink. Even leaving Ableton Live open in the background didn’t slow things down.

I don’t do a ton of 3D rendering or video editing, but I did my best to push the computer to its limits. I fired up HitFilm Express and piled a ton of 3D effects and filters onto a two-minute video of my son, and it chewed through it with ease. It took me longer to figure out how to place the cheesy 3D animations in the frame than it did to export the video.

I also installed Ableton Live 10 and did my best to bring the digital audio workstation (DAW) to its knees. I fired up a drum rack, two audio channels and five separate instances of the notoriously CPU-intensive Wavetable virtual synthesizer. Then I added a minimum of three effects to each track, including some rather demanding reverb and delay plugins — the PC barely batted an eye. When all eight tracks were going simultaneously I’d get some occasional audio hiccups, but they were few and far between. By comparison, my four-year-old X1 Carbon can’t even handle a single instance of Wavetable without collapsing into a sputtering mess.

Even some light gaming is perfectly doable here. The 1050 Ti isn’t going to let you do any 4K gaming, and you might have to turn the detail down on some particularly demanding titles. But, Assassin’s Creed: Odyssey ran at a perfectly playable 35 frames per second with the graphics set to high at 1080p. And it performed admirably enough on benchmarks PCMark and 3DMark.

That being said, I wouldn’t recommend buying this if you’re looking for a laptop primarily for gaming. There are dedicated machines for that purpose like the Razer Blade that are much better suited. I also wouldn’t recommend it if you’re looking for a machine to watch TV and movies on. While the screen is gorgeous and almost painfully bright, the speakers are abysmal. There’s support for Dolby Atmos, but that’s only through a headset. The built-in speakers are kinda tinny and barely loud enough to hear over a demanding toddler. 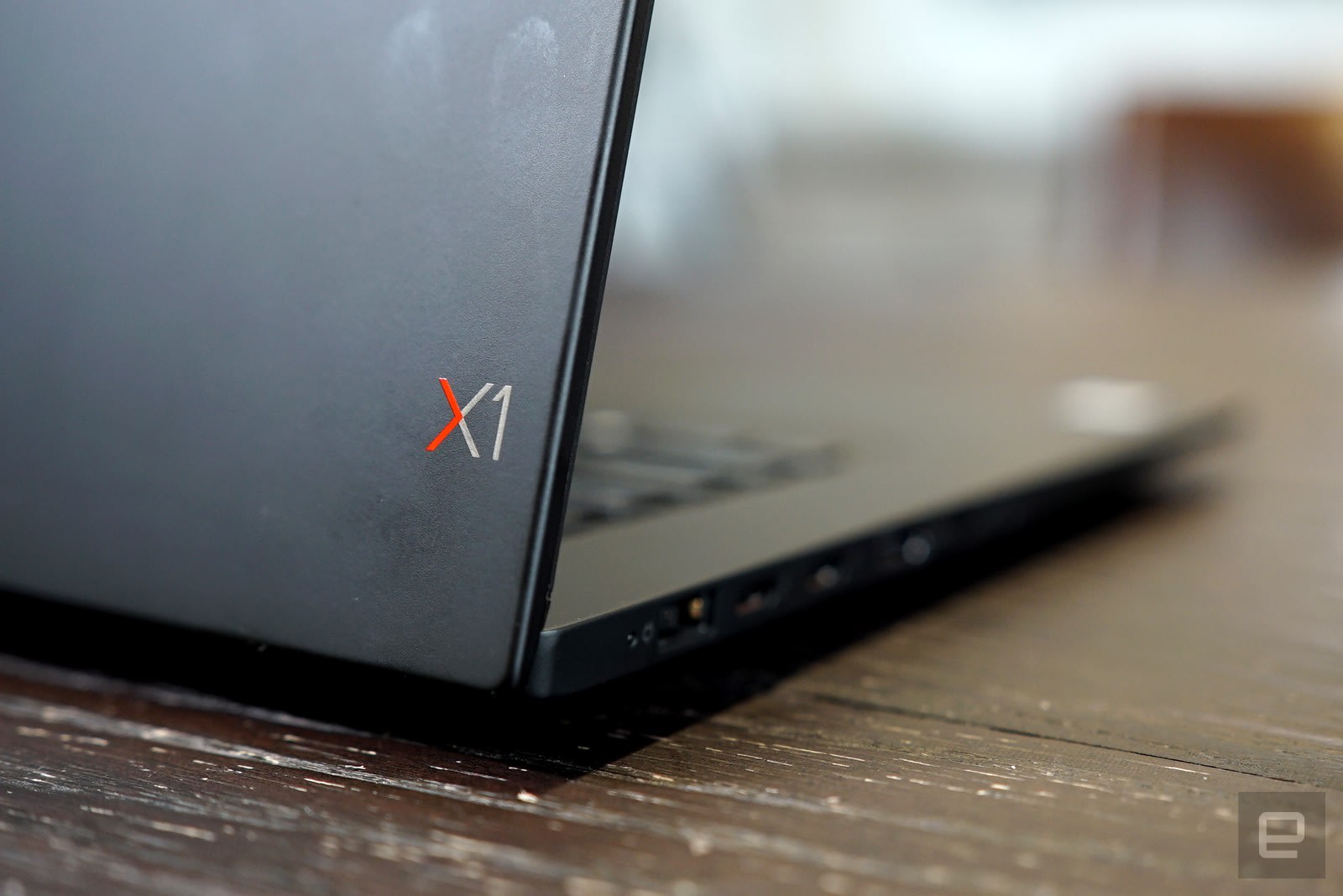 The primary competition here is the MacBook Pro 15 and Dell’s XPS 15. And honestly, picking between the three is pretty easy, depending on your needs.

If you’ve already bought into the Apple ecosystem, the MacBook is the obvious choice. It has better battery life and true workstation-grade graphics. But it also costs quite a bit more. The X1 Extreme configured as we tested it has a list price of $3,150 — though frequent sales mean the actual price is closer to $2,800. A MacBook Pro 15 with a matching 32GB of RAM and 1TB of storage would cost an eye-watering $3,600. And it has an embarrassing lack of ports.

The XPS 15, on the other hand, costs only $2,500 with nearly identical specs as the X1 Extreme. It has a slightly slower Core i7-8750H CPU and isn’t nearly as rugged, but it also offers better battery life and is slightly smaller — making it easier to slip into a backpack or shoulder bag. So if you’re looking for something with similar power, but want to save a few bucks and don’t need something built to survive dust storms and arctic cold fronts, the XPS is a solid choice.

Previous Want an iPhone 8? Apple's now selling them for $499 refurbished
Next What you need to know about the iPhone's new dual-sim feature