This great but aging RPG holds up nicely on Switch.

The Elder Scrolls V: Skyrim is one of the greatest and most famous RPGs ever created. It’s a game filled with a seemingly limitless amount of possibilities. When it comes to Skyrim on Switch, the big question left for most people is: how well does one of the biggest RPGs ever created play on Nintendo’s hybrid console? The answer is that it holds up, but doesn’t introduce enough new content or features to really draw in returning adventurers.

The Switch version includes the Dragonborn, Hearthfire, and Dawnguard DLC packs, and visually falls somewhere between last year’s Special Edition and the original console release. It’s noticeable in the detail of foliage, water shaders, and generally sharper textures. However, enhancements such as ambient occlusion, volumetric lighting, and dynamic depth of field are noticeably missing when you compare it to the versions on other consoles.

Nothing about Skyrim on Switch felt like a diminished experience.

With a resolution of 1080p while docked and 720p undocked, textures are relatively detailed, and character models are… Well, as good as you might expect from a six-year-old, open-world action RPG. It still feels very much like Skyrim, and that’s what’s most important. Whether I was playing docked or undocked, Skyrim appeared to run at a relatively consistent 30 frames per second, with only a few minor dips when loading into new areas. Not a single thing about my entire time with Skyrim on Switch felt like a diminished experience. It shares the exact same atmosphere and feeling that many of us have grown to love—hilarious bugs included.

We can’t talk about Skyrim on Switch without mentioning the newly added motion controls. At times I actually found them to be quite useful and fun. Aiming and firing your bow works just as it does in Breath of the Wild: you take aim with either the Joy-Con or Pro Controller and shoot by pulling back on the right trigger. Spellcasting works similarly, allowing you to take aim by motioning either the left or right Joy-Con. However, when I drew my sword it felt much slower and more counterintuitive than using the gamepad. I also noticed a little bit of a delay with each swing, which made melee combat feel especially sluggish and frustrating.

But my absolute favorite use of motion controls in Skyrim, by far, is the lock picking. It enables one-to-one control over the rotation of each lockpick while using split Joy-Con controllers, and uses HD rumble to notify you with a subtle tick when you find the right spot.

Amiibo support has also been added and works very similar to the way it does in The Legend of Zelda: Breath of the Wild. You can tap any amiibo once a day to trigger a random loot chest drop, which usually only nets you some lower-level gear and crafting materials. However, Zelda-themed amiibo have a chance of dropping the Champion’s Tunic, Hylian Shield, and Master Sword. All of which can be upgraded, keeping their power levels relevant for much longer than typical weapons and armor. It only took me about seven or eight attempts before I was able to acquire the entire set, but obviously, your mileage may vary. Exploring the world of Skyrim while cosplaying as Link can definitely be a lot of fun, but there’s plenty of other way more powerful gear that you’ll most likely end up switching to sooner or later. 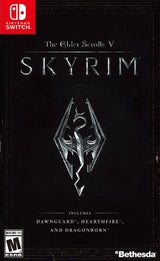 Bethesda Game Studios’ blockbuster open-world RPG puts players on the precipice of determining the future of Skyrim as the Empire waits for the prophesized Dragonborn to come; a hero born with the power of The Voice, and the only one who can stand amongst the dragons.

Although it may not be immune to the test of time, The Elder Scrolls V: Skyrim still holds up as one of the most immersive virtual worlds ever created in a video game. All of its vastness, beauty, characters, stories, and goofy bugs fit nicely onto the Switch, where it runs at a good, steady framerate and resolution. The addition of motion controls are handy unless you plan to be a melee fighter, and amiibo support is a nice touch, but neither is really a game changer. This is a great way to get your Skyrim fix if you’ve never played before or have been looking for a reason to jump back in.