The best 4K TV on a budget


Who should get this

If your TV works and you’re happy with it, stick with what you have. If your TV is dying or has already died, or if you’re looking for something larger, these TVs offer great performance at a budget-friendly price and support all the important new standards that will keep your set relevant for at least the next few years.

Specifically, the TV industry is promoting three new features, all of which we think you should actually look for when buying a TV. Ultra HD resolution offers four times the pixels of 1080p HDTVs. HDR allows your TV to produce brighter, more lifelike highlights without degrading shadow details. And wide color gamuts let you see shades of colors that exist in real life but that earlier TVs couldn’t display.

How we picked and tested 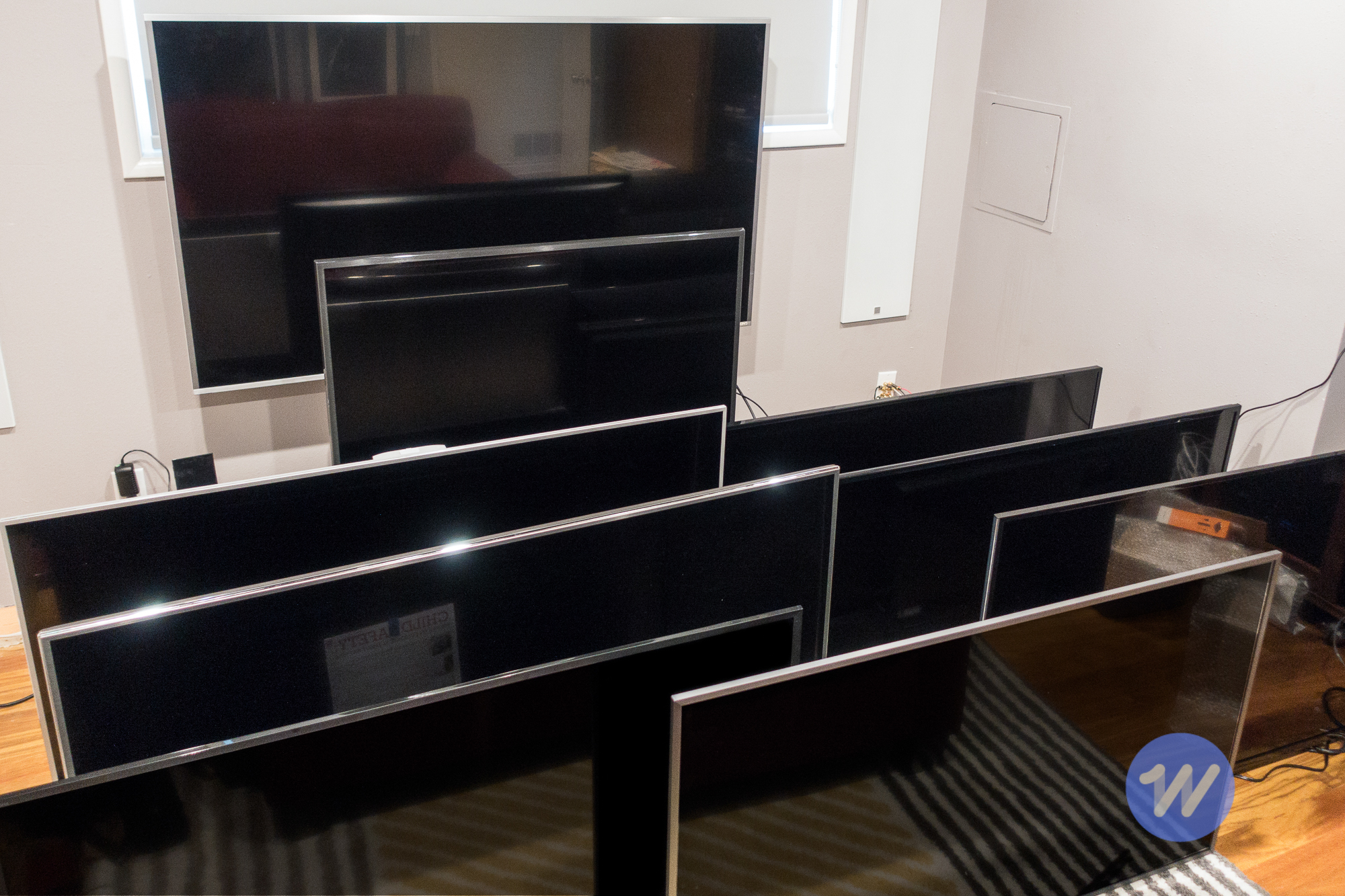 All our TVs, ready for testing. Photo: Chris Heinonen

What makes a good TV? Easy: a combination of both picture quality and features. But for about $500, it’s hard to find one TV that does it all. So in addition to reading reviews from sites like Rtings and Reviewed.com and talking with David Katzmaier, CNET’s resident TV testing expert, we polled more than 1,500 of our readers to see what they wanted most in a TV.

We found that most people want a TV that’s 50 to 60 inches in size, will last at least three to five years, and has at least three HDMI inputs. They placed picture quality above all other features, and thought performance in a bright room is just as important, if not more so, than in a darkened room. Finally, they didn’t care that much about streaming features, and they really don’t care about 3D.

The best way to compare TVs is to put them side by side and actually look at them with the same content, so we did just that. First, we called in all the possible contenders and set each one up. Then, we calibrated each TV to the best of our abilities, and took some measurements of color temperature, light output, and more. We used an HDMI distribution amp to send the same signal from a Blu-ray player or Roku to each TV.

However, according to our survey, less than 2 percent of people will spend the $300 (or more) it costs to get a TV professionally calibrated, and with a budget TV, that number is probably closer to zero. As such, we returned each TV to its factory settings before making comparisons, and adjusted only the basic user-menu picture settings. We tested each TV in a group of three, looking at each display straight-on and from an angle. We also watched each TV with the lights on and with them off. 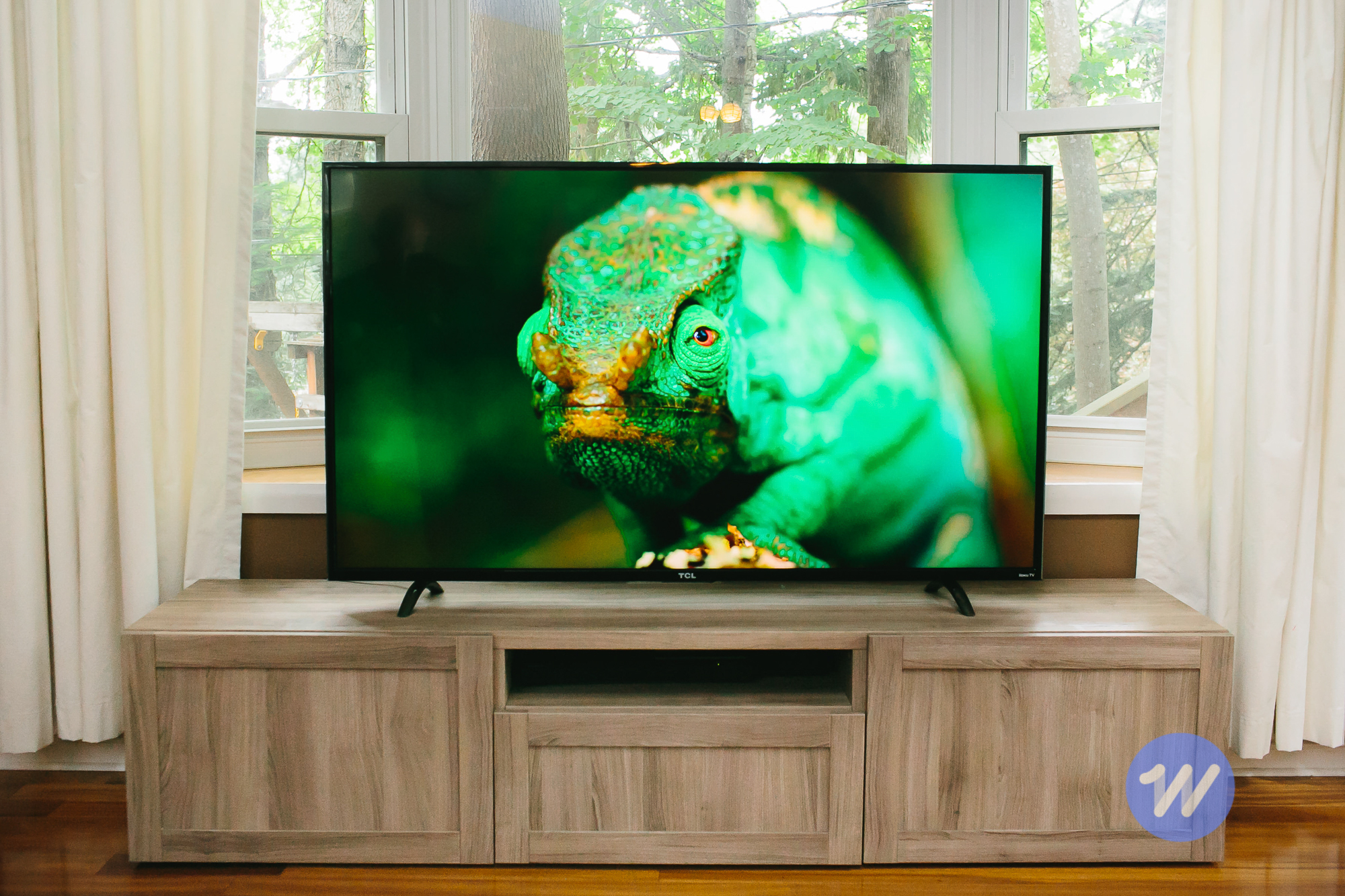 Although the TCL 55P607 fits squarely in the price range of what we’ve considered a budget TV over the past few years, it also ticks off almost all of the required boxes for a high-end TV today. In fact, we recommend it as the best TV no matter what your budget is. It produces image quality that matches much-more-expensive TVs while also offering better media streaming services and some extra features that costlier TVs don’t have.

The TCL’s 72 zones of full-array local dimming provide deep blacks without washing out shadows and also produce bright HDR highlights. The set’s HDR support covers both HDR10 and Dolby Vision protocols. Streaming apps come in the form of a built-in Roku, which has the widest selection of apps along with an easy-to-use interface. The remote even offers a built-in headphone jack for listening without disturbing others. The TV’s preset movie modes make it simple to get good picture quality without much fuss, and the iOS and Android app offer the ability to do more-advanced image calibration for those with the necessary tools. 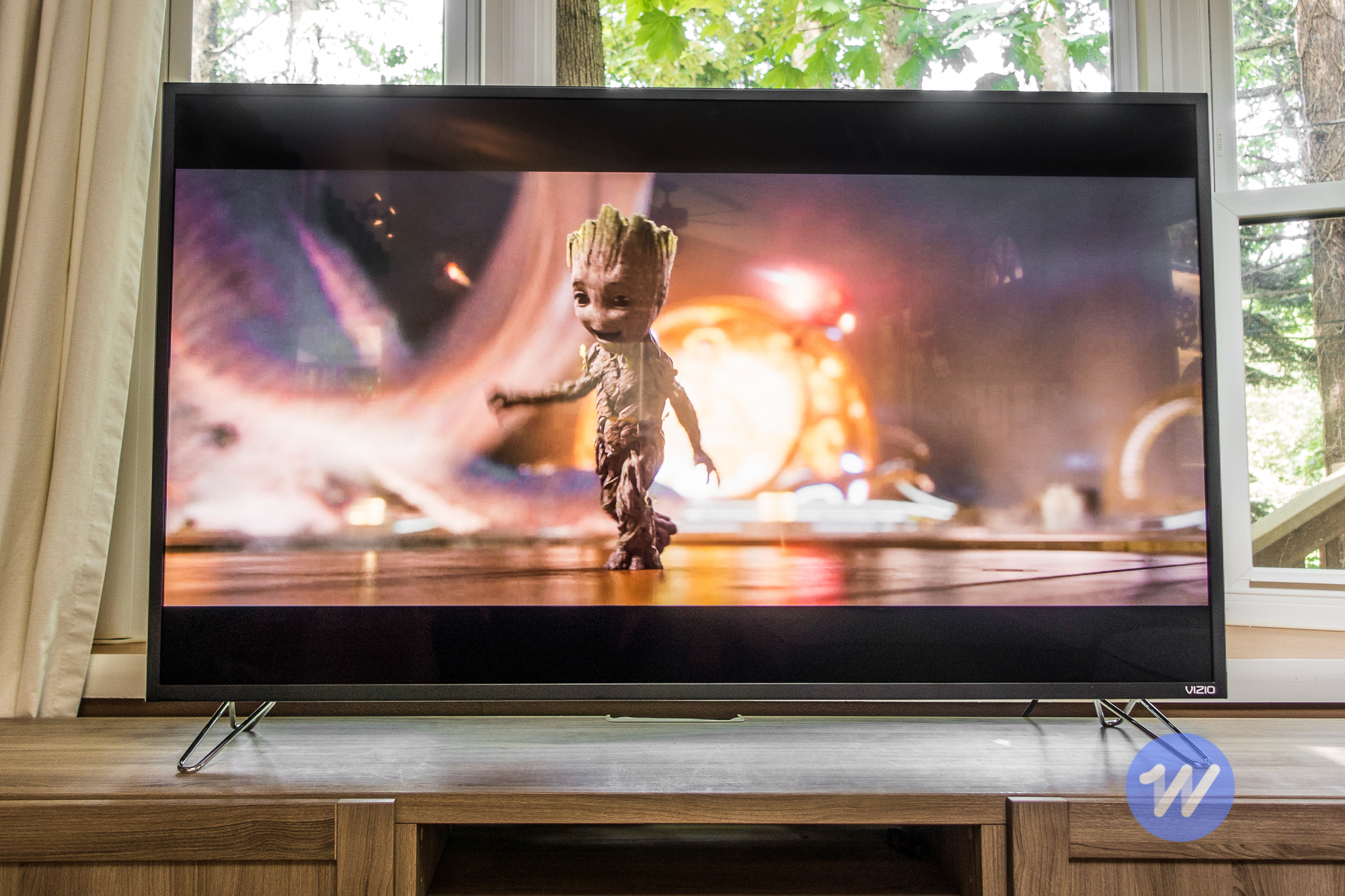 We tested the 2017 Vizio M50-E1 and think it’s worth the money if you need a new TV and our other picks are unavailable. The M-Series packs local dimming, HDR and WCG support, and integrated streaming. Its image quality is exceptionally good, but the integrated streaming interface isn’t as smooth or full-featured as others out there, and the HDR performance isn’t quite as good as some other displays. It also lacks an HDTV tuner, so people that watch over-the-air content will need an external one to use an HDTV antenna.

The M-Series supports both HDR10 and Dolby Vision, and can produce highlights up to 750 nits in brightness. Using a full-array local backlight, it can do bright highlights while keeping shadows dim, and makes both HDR and SDR (i.e., non-HDR) look better. It doesn’t quite cover as much of the DCI color gamut as some other displays, but can produce 271 million different colors, which is the same as some other similarly priced TVs. It also uses local dimming to produce deep blacks and a huge contrast ratio. Using the preset calibrated modes, you get an image that is accurate out of the box and needs very little adjustment. 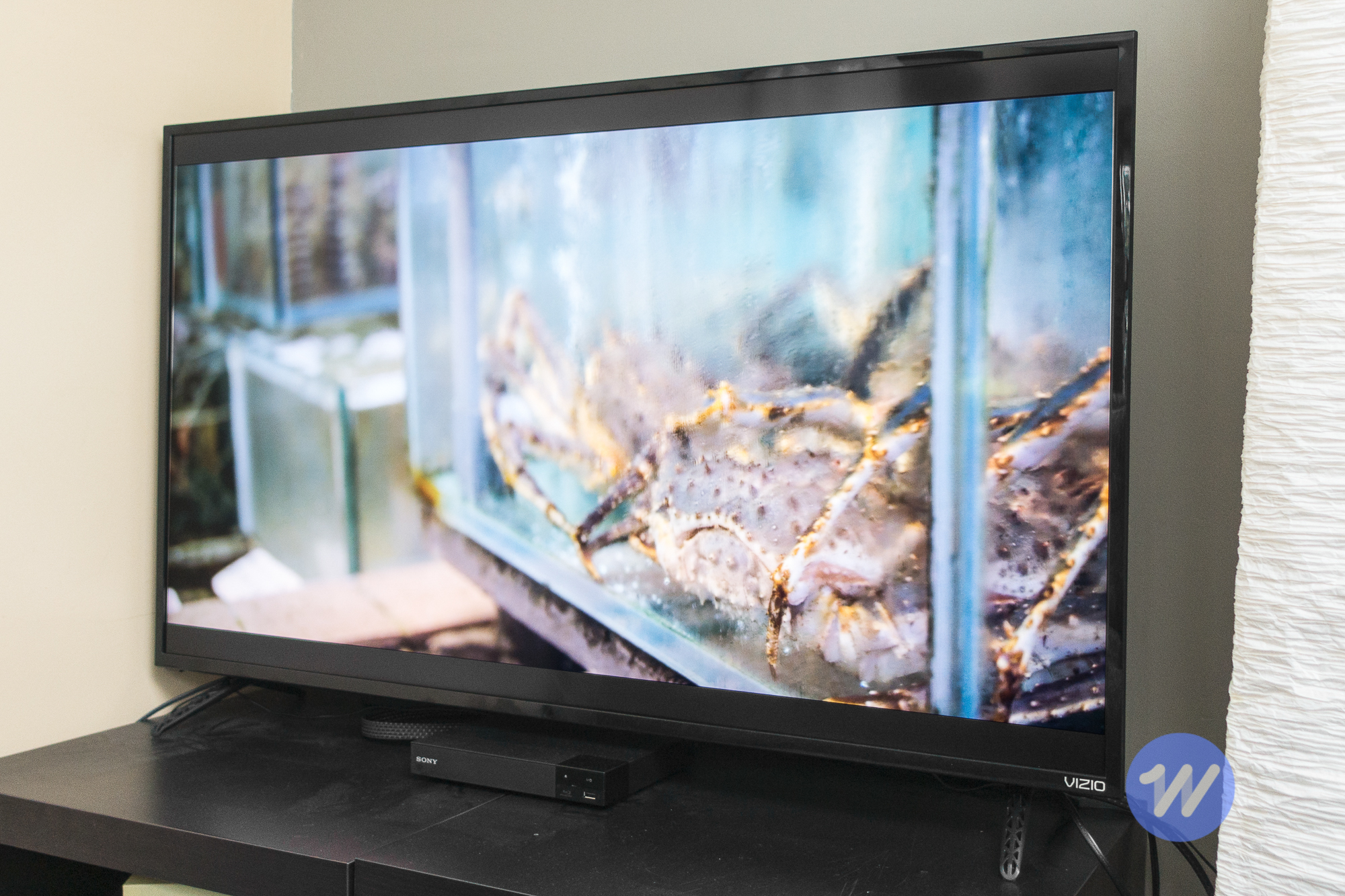 The Vizio E48u-D0 is a slightly smaller version of the Vizio E50u-D2—our now widely unavailable 2016 top pick. When we tested the 50-inch model, we found it offered the best contrast ratios and darkest blacks of the models available at the time and it has lots of inputs, good daytime and nighttime performance, and can stream content from almost any source using Google Cast. The superior black levels and contrast ratios give the image better pop than competing TVs and make it stand out in daytime and nighttime viewing. However, though the E48u-D0 does support 4K, it lacks HDR and WCG, which the TCL P-Series and 2017 Vizio M-Series both have. Four HDMI inputs, more than most competitors, offer enough connections for almost any AV system.

That contrast ratio is thanks to a combination of a VA-type LCD panel and a full-array local dimming (FALD) backlight system. This lighting system, usually found only in far-more-expensive displays, allows adjustment to the brightness in 10 individual areas of the image. This lets bright parts of the image be bright while shadowy areas stay dark. Our objective measurements find that the contrast ratio is almost three times higher with the local dimming enabled, and much higher than most competitors’.

This guide may have been updated by Wirecutter. To see the current recommendation, please go here.

Note from Wirecutter: When readers choose to buy our independently chosen editorial picks, we may earn affiliate commissions that support our work.