With its tablet sales on a sustained decline, Apple made a surprise move last month by introducing a new 9.7-inch iPad with a lower price point of $329. This new model replaces the iPad Air 2 in the company’s tablet lineup, but its specs suggested that newer doesn’t necessarily equal better. It uses the same A9 processor as the iPhone 6S and 6S Plus, but it otherwise closely resembles the iPad line it supplants: the familiar 9.7-inch Retina display, 32GB and 128GB storage options, and so forth.

Thanks to the teardown specialists at iFixit, we now know just how closely what Apple is now just calling the iPad is to its predecessors. In its tear-apart of what it calls the iPad 5, iFixit finds that it is indeed similar to the original iPad Air inside as well as outside — extremely similar.

For instance, the LCD and digitizer are not fused together, just like with the first-generation Air — and unlike the second-generation one — which can make it easier to repair if the screen cracks. They also use the same battery, which is actually bigger than the one in the Air 2 and the 9.7-inch iPad Pro. According to iFixit, the tape is even the same holding components together.

There are a few differences, however. The new iPad includes support for Touch ID, which the original iPad Air do not include. It also lacks a lock switch, which was excluded from the iPad Air 2. Beyond those and the new processor, the distinctions are minimal, such as a smaller Wi-Fi module, a different configuration of speaker holes, and the like.

Of course, in terms of iFixit’s perspective, the biggest similarity the new iPad shares with the iPad Air — and almost all Apple devices — is its inability to be repaired easily. It earned a 2 out of 10 on the company’s Repairability Score, dinged for the difficulty of battery removal and the possibility the LCD could be cracked when the front panel is removed for any repairs. 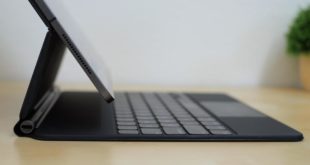