Director Masahiro Sakurai will be revealing new information this Wednesday.

Nintendo has announced that there will be a Super Smash Bros. Ultimate Direct arriving this Wednesday, August 8, at 7am PT / 10am ET.

Nintendo Versus tweeted out the news and confirmed that this Direct will feature “new game information delivered by director Masahiro Sakurai!” 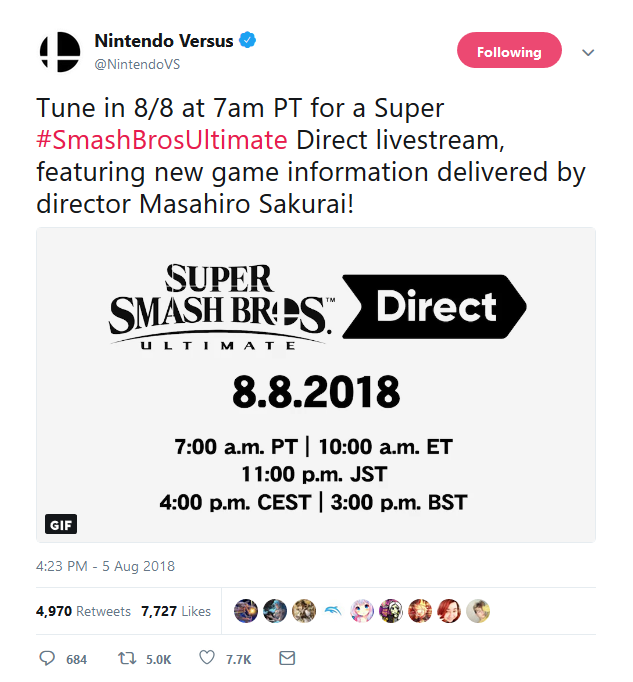 Super Smash Bros. Ultimate for the Nintendo Switch was revealed back in March with a short teaser that introduced the Splatoon Inklings to the roster and also showed Breath of the Wild’s Link.

At E3 2018, Super Smash Bros. Ultimate was Nintendo’s main focus and they revealed a ton of new information, including that Metroid’s Ridley would be joining the fight and that this newest entry would include every fighter in the series’ storied history.

Nintendo has also confirmed that GameCube controllers and Amiibo would be supported.

Speaking of Amiibo, newcomers Ridley and the Inklings will be receiving the Amiibo treatment, as well as some of the older characters that haven’t as of yet, including Pichu and Ice Climbers.

Super Smash Bros. Ultimate for the Nintendo Switch will be released on December 7, 2018, and we truly believe that it feels like a museum for the Smash franchise.

Adam Bankhurst is a freelance writer for IGN and whenever a Nintendo Direct is announced he gets so excited he sometimes passes out. You can follow him on Twitter @AdamBankhurst.