Shadow of the Tomb Raider Doubles Down on Puzzles and Exploration

I’m already mentally preparing myself to 100% Shadow of the Tomb Raider.

Of the nearly 150 hours I have in Rise of the Tomb Raider, I spent plenty of them jumping off ledges, investigating corners, staring up at empty ceilings, and trying to get just the right angle to peek into a crack in a room to find the next obscurely hidden collectible. Exploration and all the challenges area that came with it were a great post-game activity in Rise of the Tomb Raider – that is, until exploration eventually became tedious and I realized how bloated Rise was with collectibles and other extra tasks. Shadow of the Tomb Raider touts a bigger and more immersive setting, and Shadow of the Tomb Raider’s narrative director, Jason Dozois, and level design director, Arne Oehme, assured me that a focus on building out the game’s fictional culture will help keep exploration interesting.

Shadow of the Tomb Raider takes Lara Croft to a city she thought was long dead. Instead, the city of Paititi is a thriving Maya and Inca-inspired community that’s lived in forced isolation for hundreds of years while under the control of a cult. The hands-off demo I saw featured Paititi, its residents, and a bit of exploration.

Paititi is bustling with life. The hub is so big that it’s split up into different districts. There’s a clear farming area, a textile area, a market, and much more I didn’t see. In Paititi Lara can pet llamas, take on side missions, buy new gear, chat with strangers, and generally learn about the people and history of Paititi. I wanted to explore every inch of the pace and listen in on everyone’s conversations.

Oehme said that this social component is important for helping make Shadow of Tomb Raider’s exploration more robust and that, instead of being “a walking vacuum cleaner” when exploring a space, you’ll get to do some “archeological detective work.” It seems that points of interest like Challenge Tombs and Crypts are somehow tied to a person in the world who can give context and build a story around those locations, which could provide for an even richer experience. 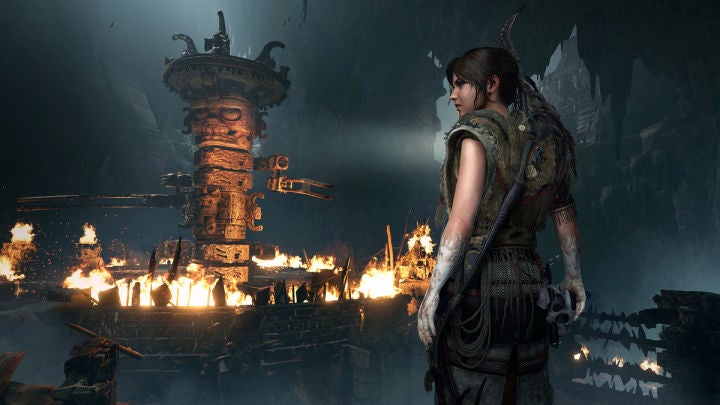 The new tomb shown in my demo was quite grand, much like the tomb shown in a previous demo. The new tomb had a flashy and dangerous entrance that made the reveal of the interior even more impactful. Though there is an emphasis on descending into darkness with Shadow of the Tomb Raider for obvious metaphorical reasons, there was also great verticality to the tomb. Before the demo cut off, Lara made it to the middle of the massive room only for a spinning pillar that doubled as a death trap emerged from the ground. It looks like it’ll make for a great challenge, and probably has some interesting cultural relevance.

Exploration, combat, and puzzles have their own difficulty settings.

As for collectibles like relics, murals, and documents, those seem like they’ll exist as they always have, but a major change could make finding them much easier. In Shadow of the Tomb Raider, exploration has its own difficulty setting, just like combat and, surprisingly, puzzles. Though I didn’t get to see the easier or harder exploration difficulties in action, I was told that Lara would make more observations about points of interest and climbable areas have more obvious visual indicators on an easier exploration setting. The reverse is true for the harder exploration setting; there are no visual indicators and Lara doesn’t give any navigation hints.

The new difficulty options could be a great way for each player to tailor their Tomb Raider experience to feature a better challenge for the thing they’re most interested in, whether it be the exploration, puzzles, or combat. I can already see how it could be a great help when I’m looking for that one final collectible in a level I just can’t seem to find.

As a fact-based fictional culture, Paititi and its people were developed with a lot of “what if” questions. What if ancient Maya and Inca cultures came together and lived in isolation? What if an external power, the mysterious Cult of Kublai Khan, was the reason they stayed in that vacuum and developed a new kind of culture over hundreds of years? These are the people Lara is looking to help in Shadow of the Tomb Raider, and Dozois and Oehme said they worked with historians and consultants to develop this “what if” civilization’s architecture, activities, city layout, and a whole lot more.

I appreciate Eidos Montreal’s dedication to respectfully and accurately developing this fictional culture and hopefully not using it flatly as Lara’s playground. Features like Shadow of the Tomb Raider’s Immersion Mode allows players to choose whether all the people of Paititi speak Yucatec Maya or English show the team’s dedication to achieving authenticity. The default audio is a mix of both, and exciting to me as someone with a Mexican heritage, the Yucatec Maya voiceovers were translated and recorded in Mexico. With what I’ve seen and heard so far, from the larger hub and bigger tombs to a carefully crafted fictional culture, it’s hard not to be interested in this new world that Eidos Montreal has made for the Tomb Raider series.

Miranda Sanchez is a senior editor at IGN. You can chat with her about video games and anime on Twitter.