Crucially, though, you’re not alone. The game takes place on a single planet that will, eventually, be inhabited by hundreds, possibly thousands of players simultaneously. Everyone will have their own towns and the freedom to choose who they collaborate and compete with. It will also be a shared, online-only experience that runs 24 hours per day, simulating the actions of your villagers whenever you decide to close the application.

Players will control their citizens indirectly. You can build houses, which spawn new villagers, and check each person’s daily schedule. In the future, you’ll be able to tweak this itinerary and also plan their actions for the days, weeks and months ahead. Then, it’s a matter of observing the simulation, reacting to the needs of your people, and choosing the best way to coexist with other players who encounter your settlement. 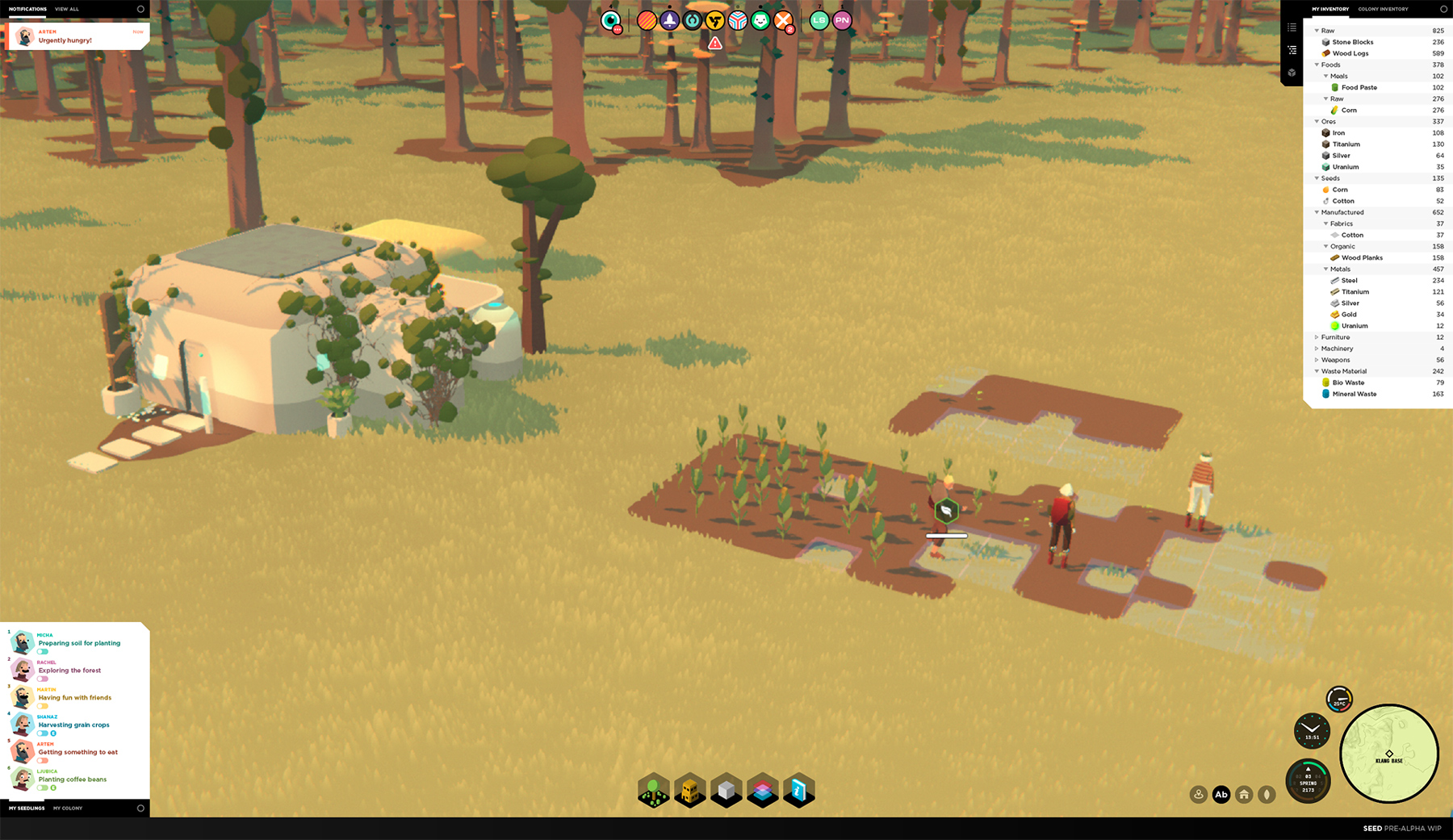 It’s an ambitious project made possible by SpatialOS, a much-hyped platform built by the secretive startup Improbable. The service uses multiple servers, working in tandem, to help developers create large, persistent worlds and simulations. It’s already being used in a vast, massively multiplayer online RPG called Worlds Adrift, developed by British team Bossa Studios. Seed is part of a second wave, including the battle royale-inspired Mavericks: Proving Grounds, that hopes to leverage the technology for fresh and potentially groundbreaking gameplay.

At Gamescom 2018, I played an early version of Seed with Mundi Vondi, CEO and co-founder of developer Klang Games. We created a couple of characters each and formed a new settlement, called ‘Nickland’ (I was tired and lacking imagination, okay?) in an open, grassy area of the map. Immediately, our villagers, decked in simplistic robes and glasses, started to roam and collect precious resources for the group. At any time, I could click on their faces’ in the top right-hand corner of the screen and review their Sim-like needs, including sleep, hunger, love and entertainment.

Once enough resources had rolled in, I created some simple tents around a small campfire. A few minutes later, I had a couple of houses and four villagers at my disposal. It was a peaceful and relaxing experience that encouraged me to take breaks and simply watch the simulation unfold. In the future, though, many players will be competing for power and influence across the world. You can find a quiet corner and strike out on your own, hoping that others will leave you be, or join an already impressive settlement that can provide resources and security.

Previous For IGTV, Instagram needs slow to mean steady
Next The best drones under $500