A classic LucasArts adventure by way of the apocalypse.

Paradigm is as traditional a point-and-click as I’ve played in a while, with a design, structure, and sense of humour that wouldn’t feel out of place in the genre’s heyday of the early ‘90s. Channelling the anything-goes spirit of LucasArts and Sierra’s comedy classics like Sam n’ Max Hit the Road and Space Quest with a touch of the truly surreal, it presents a fun story that I won’t soon forget. Because hey, a talking sloth named Olaf wearing a Trump-like toupee that vomits candy bars is inherently unforgettable. 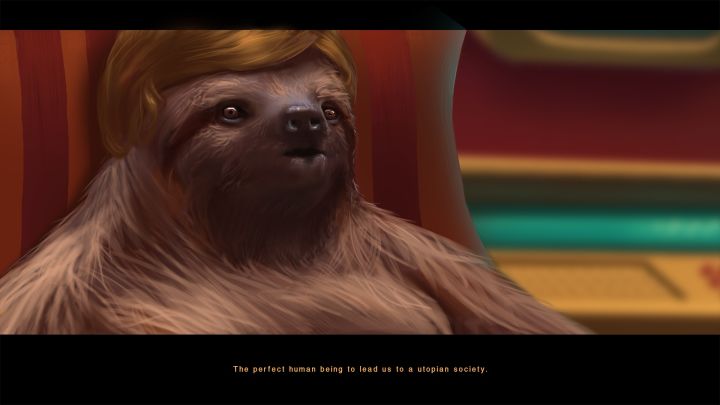 When we think of the adventure genre there’s a good reason why some of the more memorable ones have been straight-up comedies. A traditional adventure lends itself, perhaps better than most kinds of games, to the simple idea of telling a joke. Interacting with the environment to solve puzzles is a well-worn adventure game staple, and in a comedy like Paradigm looking at an object will more often than not result in a humorous observation about the protagonist’s life or the post-apocalyptic setting of Krusz. It also takes some clever stabs at the conventions of the genre, such as in the case of trying to “pick up” an inanimate object, when Paradigm will hilariously interpret the request in the dating sense of the term.  In the worlds of adventure games where obscure logic puzzles, character interaction, and wandering about clicking on things are defining qualities, this sort of comedic approach heightens the experience.

But being funny is only one part of the equation, so to speak, as any comedy that isn’t a quickfire sketch needs both characters and underlying themes that we, as an audience, can grab onto. On a more literal level, this is a funny story about a genetically deformed humanoid who goes by the name of Paradigm and dreams of becoming an electronic musician. With his charming and thick European accent, positive outlook, and self-deprecating sense of humour, it didn’t take long to see Paradigm as quite an endearing protagonist. Subsequently, through venturing beyond his power plant habitat, he becomes embroiled in a plot that involves world domination, drug deals, dealing with IT support, scientifically created prodigy children, and an alarming number of beings that seem to be sentient water. The story quickly becomes full of memorable faces and comedic performances.

For the candy bar-regurgitating Olaf, perfectly voiced by British actor Ian Champion, it’s his tragic yet still very funny backstory that elevates his reveal as the ultimate villain from the visually funny to the truly endearing. Underneath the immediate layer of sight gags, references, and ironic dad jokes, Paradigm is a story about ambition, identity, and being happy with who you are. For Olaf, who was created by a diabetic scientist who thought it would be a good idea to fuse a candy machine with a sloth, his plan to rid the world of genetically enhanced prodigy children and replace all entertainment and religion with Glam music and a hard-drinking lifestyle becomes totally understandable. It’s an absurdist and refreshing take on the whole ‘screw you dad, I’m doing things my way’ setup.

And it’s characterisations and moments like this that keep Paradigm’s six-or-so-hour running time feeling fresh, unpredictable, and ultimately very funny throughout. It’s the sort of experience where, after figuring out how to get rid of a sentient watercooler doubling as an evil guard (hint: it involved using a mug), I was floored moments later when I picked up a personal organiser and realised that it had a playable dating-sim on it. One where I found it a lot easier to win the love of a toaster than, say, a mutant duck-hybrid.

A thorny question, to be sure.

There’s no shortage of creativity and inventiveness in each new location and puzzle that Paradigm presents, and if you find these descriptions even slightly amusing, you can probably guess if this is a game for you. Paradigm to me feels like a cross between an Adult Swim cartoon, a Pixar animation, and LucasArts classic Sam n’ Max Hit the Road. In other words, my cup of tea.

Paradigm to me feels like a cross between an Adult Swim cartoon, a Pixar animation, and LucasArts classic Sam n’ Max Hit the Road.

One of the other things you’ll notice, outside of the surreal and comedic premise, is the wonderful and unique art direction and sound design. Unlike most animated comedies, Paradigm’s look and feel is distinctly Eastern European, drawing inspiration from mostly unseen Soviet-era sci-fi films with an overall aesthetic that feels like a cross between the work of Andrei Tarkovsky and a 1970s vision of a possible 21st century. The sort of look where a post-apocalyptic landscape is not a wasteland but simply empty and overgrown. Still intact buildings feel like they’ve been abandoned for decades, oozing a clinical and painted concrete look that screams oppressive regime. But amidst all of that, large computer mainframes, tape reels, keyboards with strange lettering, and space-age furniture add to the sense that you’ve stepped into another era and culture.

Having a clear and distinct art style is a definite plus, but to embrace it and specifically create moments that highlight and celebrate it is one of Paradigm’s secret weapons. In much the same way a show as visually distinct as The Simpsons can parody the look and feel of a videogame or Japanese animation, Paradigm is able to achieve the same effect when it wanders off into similar flights of fancy. You’ll need to beat a high score in a charming cartridge-based game called Boosting Thugs in order to get a token that you’ll need to buy some (totally legal) Space Dust, which in turn you’ll need to give to a junkie that goes by name of Space Cadet in exchange for a floppy disk containing a cracked copy of an operating system you’ll need in-order to stop a nuclear holocaust. Phew! So yeah, standard adventure-game fare.

Fightin’ round the world.

At a glance, this game-within-a-game looks like a parody of a typical beat-em up that you might have found in an arcade circa 1991, except for the fact that the pixel art is nostalgic whilst retaining the core aesthetic and thematic tone of Paradigm. Plus, the mechanic of having to take out thugs by choosing the right motivational quote to boost their self-esteem is both hilarious and a core part of Paradigm’s message. Which is there, hidden underneath several layers of beatboxing eggplants.

It’s the confidence in the comedy, story, and characters that elevates Paradigm above being a collection of seemingly random and out-there gags and puzzle scenarios. The only real downside is that I found a lot of the puzzles themselves to be a touch straightforward, rarely entering that multi-layered, complicated, and satisfying realm that a lot of classic adventure games have. As straightforward as using a mythical lance you borrow from a fantasy-knight turned secretary to nab an out of reach limb can be. That’s a little strange, considering how strong all the other elements are. Solutions that require interesting item combinations are few and far between, and for the most part if you pick it up, it’ll be used pretty soon in a puzzle. But Paradigm has it where it counts, in that it’s an adventure game where surprise lives around every corner, and where playing to reach the next story moment, comedic moment, or character interaction is the driving force.

The future is now.

Paradigm is a Point and Click Adventure Game which is set in a strange fantasy world in the not so distant future. Its main style influences are Eastern European settings, the late 70’s and early 80’s.

Funny and fresh from beginning to end, Paradigm is a traditional point-and-click adventure game full of heart and decapitated heads in jars. The Eastern European setting, great voice acting, and confident comedy shine throughout its roughly six hours. Relatively simple puzzles aside, Paradigm offers a fresh and memorable entry in a genre that I’m happy to see alive and well in 2017.