Nintendo Labo hands-on: Cardboard has never been this fun


Entering the Labo demo area gave me flashbacks to elementary school. A name card pointed me to my assigned table, which I shared with another reporter. All of the desks were arranged around the edges of the room, which gave Nintendo’s representatives, decked out in bright pink sport coats, plenty of room to show off the accessories. On the side of my desk lay a tray filled with markers, crayons and snacks, all of which really made me question my adulthood. 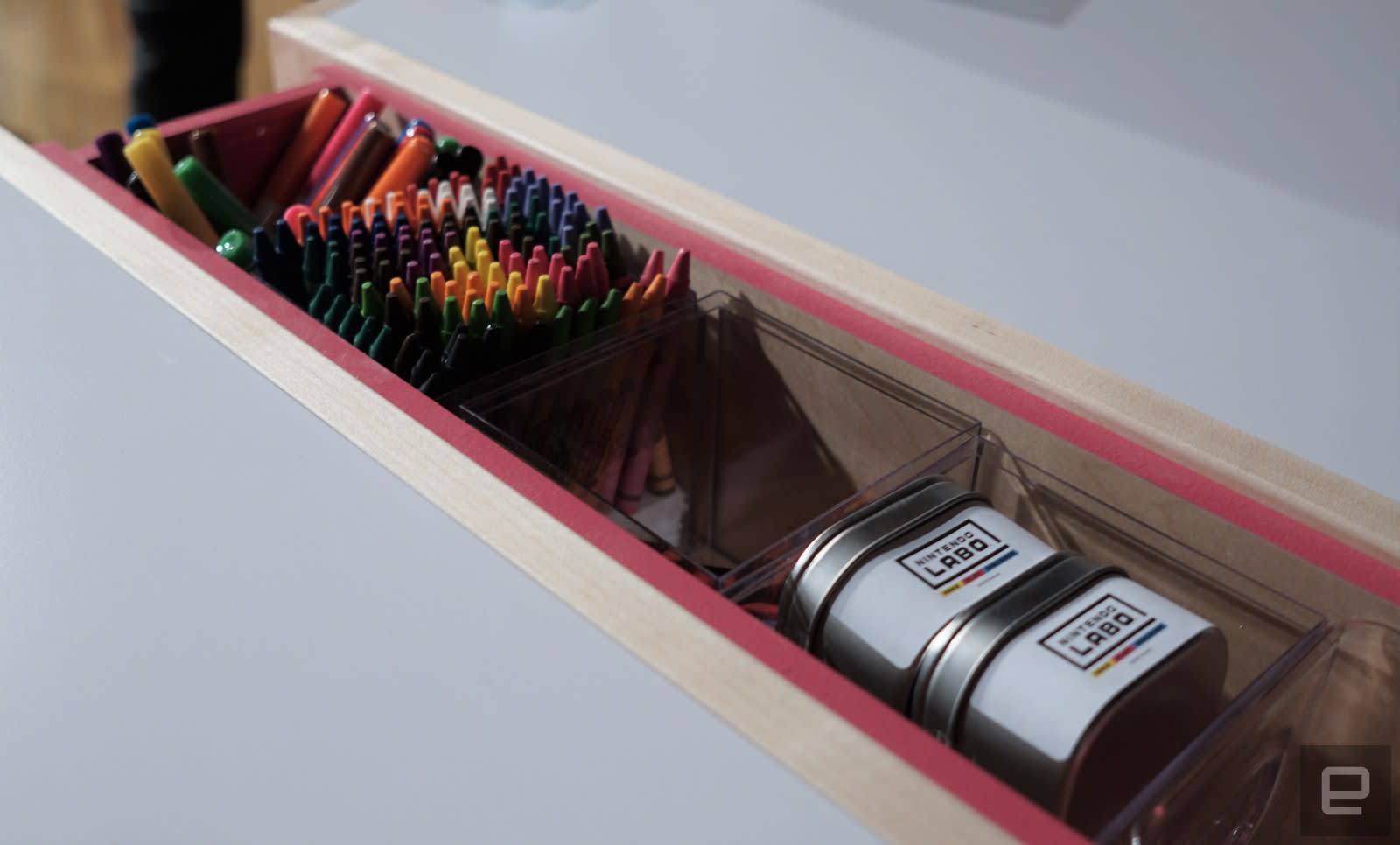 We started out by building the RC Car Toy-con, which looks more like a vibrating bug than any sort of vehicle. My partner and I punched out the required parts from the sheets of cardboard, then followed along with the Switch’s instructions for constructing the toy. The interface was a bit confusing at first — for some reason, you have to hold down the touchscreen buttons to move the tutorial forwards and backwards, instead of just tapping them. Once we figured that out, though, it was mostly smooth sailing.

The Labo app clearly lays out what you need to be working on, and how exactly you need to fold specific creases to construct each accessory. You can also use the Switch’s touchscreen to move the on-screen diagram, letting you see different angles in case you’re having trouble. My deskmate and I had our RC Cars constructed within 15 minutes, and we finished them off by sliding on our Joy-cons. I was honestly surprised by just how well they fit into a few cardboard slots. 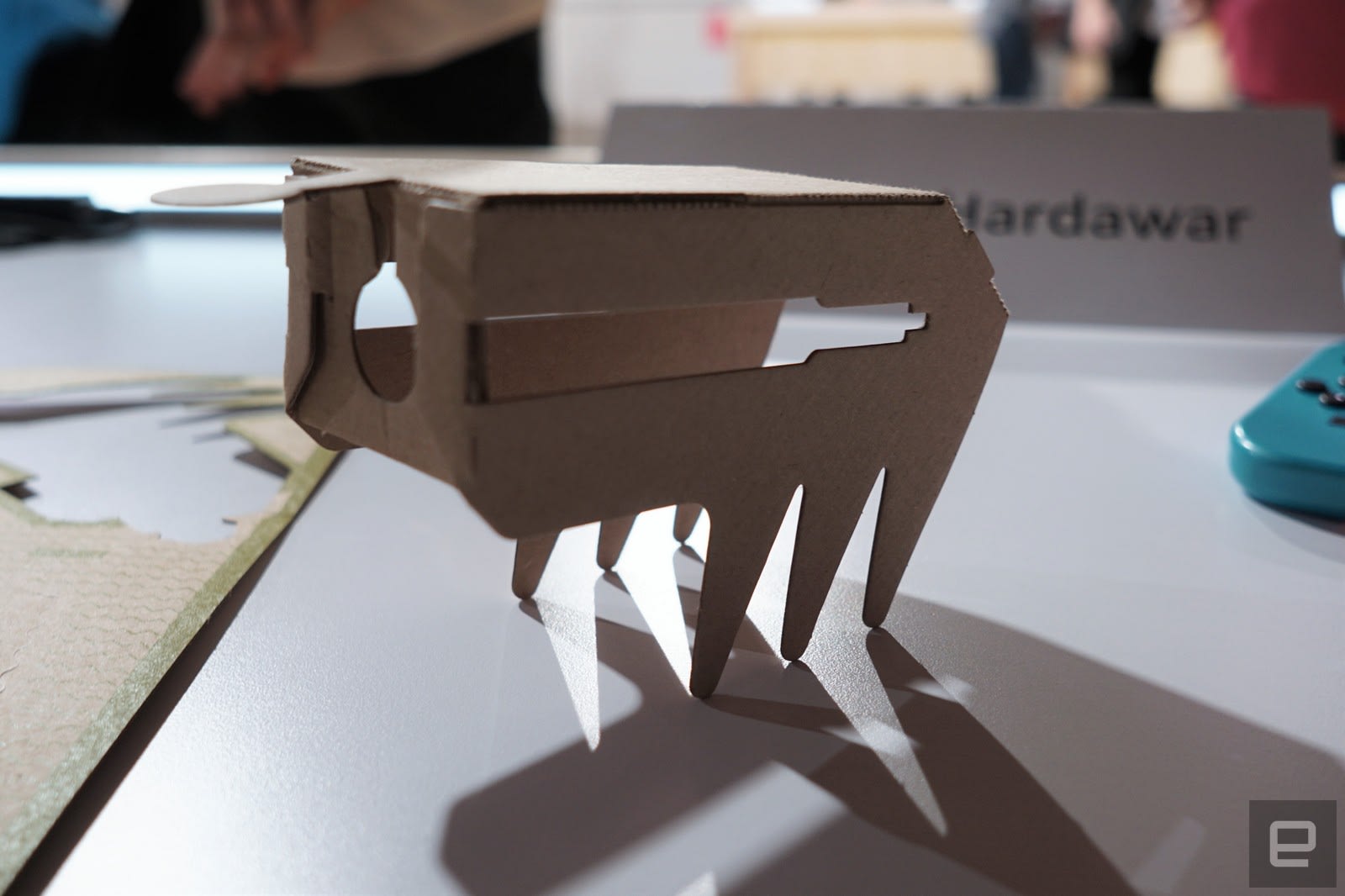 After that, we attached a cardboard antenna to the Switch tablet (no, the antenna doesn’t actually do anything), and used the Labo app to buzz our RC Cars around the table. It’s not exactly a complex toy — it relies on the Joy-con’s HD rumble feature to move, and the app lets you control the intensity and direction of its vibrations. Still, it’s a quick and helpful introduction to Nintendo’s vision for Labo.

Completing the RC Car was also useful morale booster before we were confronted with a more daunting project: the Labo Fishing Rod. It’s significantly more complex, since it involves moving parts. All of its components are spread across six cardboard sheets, and they number in the dozens. My partner and I split up the work of punching out the required pieces, and we took turns putting it all together.

First up, we had to construct the three extending portions of the rod, adorably named “Papa bear,” “Mama bear,” and “baby bear.” Furious cardboard creasing and folding ensued, and we had to pay extra attention to the instructions on the Switch. Some components were very large, and we had to make sure the folds and notches were all in the right place. At one point, we ended up building the “baby bear” part instead of “mama bear” (they look very similar, okay?!). We were still able to finish the piece properly, without precise instructions from the app, since we started to understand Nintendo’s folding logic. 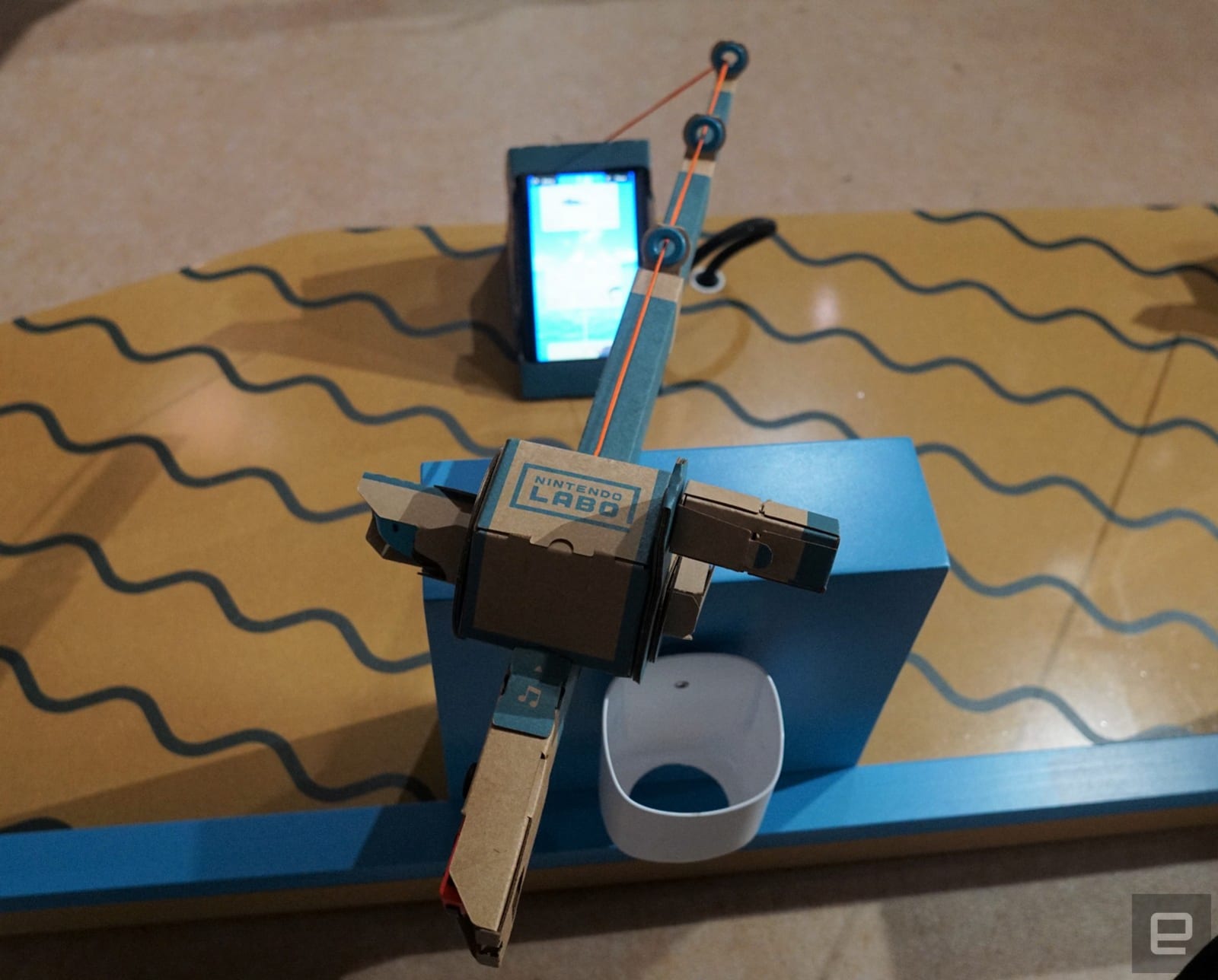 Unfortunately, we weren’t able to finish the Rods in the 50 minutes Nintendo gave us. I was looking forward to seeing how the reeling mechanism gets assembled, but I guess I’ll have to wait for the Labo’s launch. Nintendo took pity on us, though, and let us play with some finished Fishing Rods. They didn’t exactly feel sturdy — cardboard can only do so much — but I was impressed by how natural the reeling felt.

After we failed at construction, Nintendo moved us along to a room filled with completed Labo Toy-cons. I hopped on a child-sized bike — feeling even more ridiculous as kids plopped down alongside me — and picked up the Motorbike accessory. It’s basically just a pair of handlebars, with space for a Joy-con in each, and a nook for the Switch tablet in the middle. It also has a long base, which rests against your thigh or stomach to balance the entire contraption as your playing.