If you need materials from a certain monster, always check the Investigations you have available at the Resource Center, the same place you go to register and turn in Bounties and Delivery Quests. These offer Bonus Rewards, which can grant you rewards that are usually only carvable, and sometimes they offer significantly more Zenni (the currency in Monster Hunter World).

Use All Your Tools[edit]

You’ll want to make sure that you know what tools in your arsenal you like best – unlike other RPGs, Monster Hunter doesn’t limit you to selecting just one or two starting weapons at the beginning of the game.

You’ve got access to all 14 weapon types, so make good use of them! Make sure you go on at least one expedition or hunt with each type of weapon. Maybe you’ve always been a “sword-and-shield” kinda hunter, but maybe you’ll find that you really like the dual blades or massive gunlance – it’s good to experiment with as much gear as possible so you can figure out what style and items work best for you before investing materials and money into one.

The tents at each campsite can be entered and used to resupply your inventory from your supply chest in Astera and swap weapons and armor in the field.

Take advantage of this to try different tactics and weapons against tough opponents.

When you get back from those missions, you’re usually given an assortments of items and rewards – taking the time to individually collect each one can be a huge pain – thankfully you can collect them all quickly by holding down X or A

Always mind your surroundings! You can interact with all sorts of flora and fauna throughout each area – a bunch of which can help you out in combat.

Keep your eyes peeled for items like health-restoring Vitalily flowers and dangerous Poisoncups or paratoads – be extra careful around these hazards, though, as they can’t tell the difference between friend or foe!

Another fun thing in the Monster Hunter universe is that everyone’s legs are apparently invincible, since you can fall from any height and take zero damage. Use this to your advantage when getting around maps and surprising monsters.

They never really direct you there, but there’s a wealth of helpful information hidden in the pause menu, including your Hunters Notes. 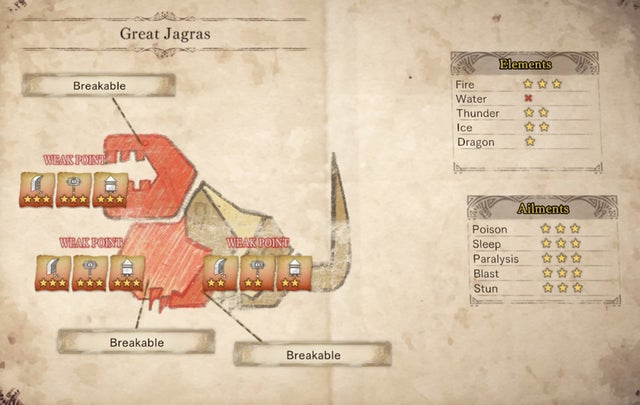 These offer a bunch of valuable intel on the wildlife that inhabit the New World, plus a list of active and available bounties and investigations. You can also re-read any of the tutorials you’ve seen so far, and there’ a bunch of great tips for both new and veteran hunters as well.

Bet you think that arm-mounted crossbow thing is pretty cool huh? Wanna use some of that explosive ammo you’ve got in your item box in it? Well, too bad – that ammo is just for guns. Slinger can only use items that you acquire while out in the world, and picking up another ammo type will usually drop what you’ve currently got equipped. You can craft certain slinger ammo types, like dung or flash pods, but other ammo like scatternuts will have to be collected. 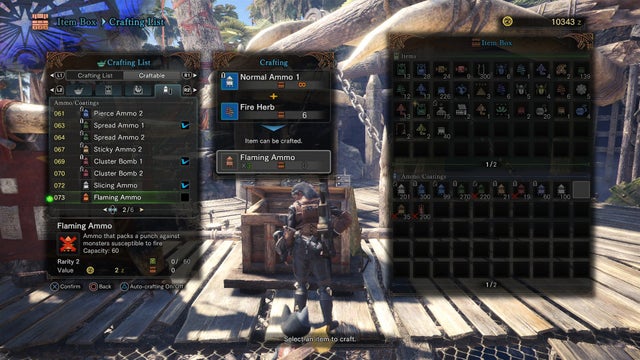 When equipping Bowguns, be aware that not every piece of ammo can be used on any firearm, so make sure you don’t waste your precious resources crafting ammo you can’t use. Luckily, you’ll see which ammo your currently equiped gun can’t use when hovering over that ammo type.

Some ammo for the Light and Heavy Bowguns are a drag to reload. But, if you roll off a ledge (or a cliff) to reload, it will be much, much faster.

If you hit a Wingdrake with your Slinger, it’ll be slightly stunned and drop lower in the air – this allows you to hook onto it with your rope by pressing O/B.

You may not be able to control where they drag you, but it’s a great way to uncover more of the map and get a birds- or drakes-eye view of your surroundings. 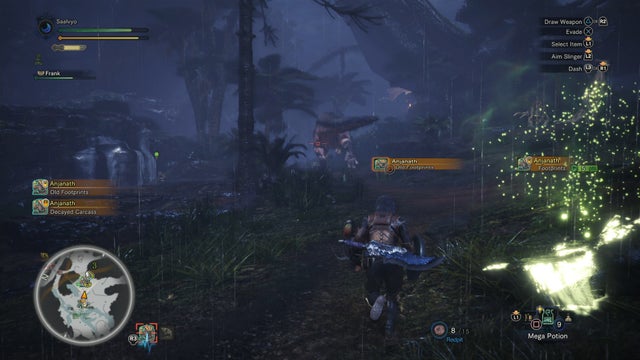 When tracking a monster, don’t stop collecting tracks or samples just because you know what and where it is – claiming those tracks will still earn you research points that can be used to unlock more information on your target and spent on useful items later on.

You may be tempted to just dive into the next hunt right after you’ve finished the last one, but be sure to check around Astera and in each location you’ve visited for some optional activities and quests – they might lead you down an interesting story path or or unlock some valuable resources.

Don’t Be Greedy (Unless You’re Alone)[edit]

When you launch into a new quest and arrive in the quest region, you’ll see a large supply box within the camp – inside are free items you can grab and use during your hunt.

It’s important to keep in mind that when you’re playing with others, this gear is shared. So unless you’re all by yourself – or don’t mind being a huge jerk – don’t look all the items for yourself.

Once you’ve downed a few beasties and collected some cash and supplies, you might be tempted to purchase a full set of cool new armor. However, it’s often a lot more beneficial to you – especially early on – to buy items from each set piecemeal, then create a functional hodge-podge of armor that will offer you a wide variety of protections, or more useful stacked skills

If you find yourself on a hunt or quest that you’re having great difficulty with and need to take a break, or if you just need to return to base to resupply, ALWAYS be sure to abandon the quest from the Pause menu instead of returning through the travel system. By abandoning the quest, you guarantee that any consumables you may have used during the course of the expedition are returned to your inventory. You can’t really exploit this to gain more items, but it’s a great help to not have to worry about restocking any time you want to restart a mission.

The only time you shouldn’t hit Abandon Quest is if you’ve found a very rare item, like a specific Plate or Jewel that drops from a monster – retreating from the quest might cost you whatever consumables you used on the trek, but locking down those rare finds is more important.

Around each area you can run into local inhabitants called Grimalkynes. If you manage to track them down your Palico can chat them up and usually convince them to join you on your expedition! 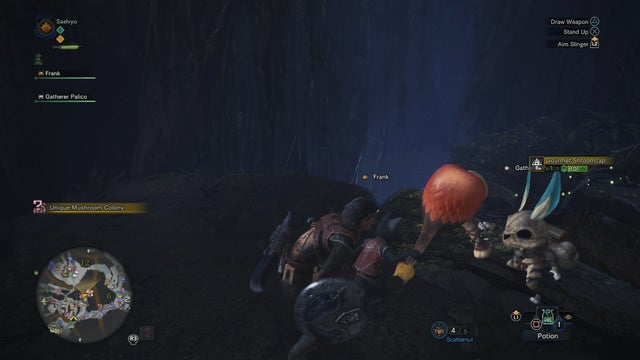 Some have extra helpful skills, like noticing items around the world, but they’re also great to have around as an extra combatant. Some of them will send you on a quest, and if you prove yourself, they’ll teach your Palico new skills and how to ride the local scrub monster, like the Coral Highland’s Shamos.

As you progress through the story, you’ll unlock Arena Quests, which are time trials for up to two hunters set in a small – wait for it – arena. You can only access these quests through the Quest Counter in the Gathering Hub, so don’t forget they’re there. By completing Arena Quests, you won’t get monster materials, but you will earn special coins which can be turned in for special weapons at the Forge. They’re also a lot of fun to test your skill with!

Almost always after you catch a monster, once you’re far along enough in the story, a new optional Special Arena quest will show up on your Quest Board.

These are different from the ones at the Gathering Hub – they take place in a special arena equipped with ballistae, canons, traps, and the almighty dragonator, and you’ll get to carve the monster and earn materials as rewards. So, basically, if you capture a beast once, you’ll get to hunt it again after holding it cruelly in captivity. You monster.

Getting a little lonely in the New World? Why not get yourself a pet? Use the net in your inventory to capture smaller local wildlife – you’ll receive a few research points for your trouble, but more importantly you’ll now have a new animal companion that you can let loose in your quarters back in Astera.

In the Tradeyard of Astera, you’ll see an adorable little creature called a Poogie. Press O or B when you see an exclamation point appear above his head and you can befriend him, name him, pick his adorable little pajamas and carry him around like he deserves.