Before we go on, it would help to know what Mastodon is. Some would say it’s a Twitter clone, but there are enough differences that it’s really quite a bit more than that. Yes, the interface looks very much like Tweetdeck: there’s a vertical timeline, you can retweet (known in Mastodon as a “boost”), favorite (stars instead of hearts) and posts have a funny nickname (they’re “toots” instead of “tweets”). But a few features really set itself apart.

There are the obvious ones. It has a 500-character limit instead of 140, you can set content warnings per post by hiding sensitive content behind a “show more” button (some users have taken to using it as a joke setup mechanism) and you have way more privacy options. Posts can be totally public, private (only your followers can see it) or unlisted — which means it’s still viewable to the anyone who goes to your profile page, but it won’t show up in the public timeline. 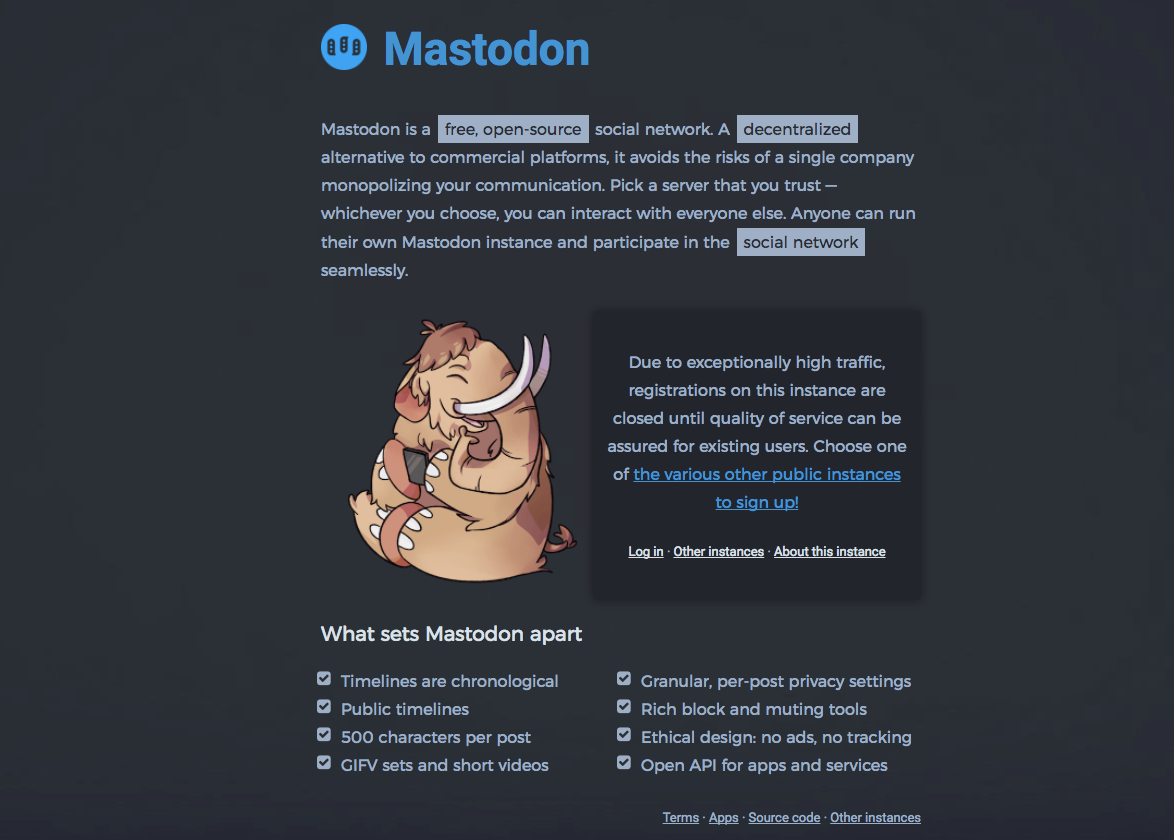 But the key differentiator from Twitter is that Mastodon is a free, open-source protocol that’s distributed across multiple “instances,” so there’s no centralized server. It’s not really a traditional social network in that sense. Each instance has its own set of users, but you can still follow and interact with users from others. A “local timeline” only shows posts from your, but a “federated timeline” shows posts from yours as well as the instance of the people you follow (There’s a more succinct explanation of it here).

One of the benefits of having these multiple instances is that each can set its own rules. For example, the main instance, mastodon.social, has a strict policy of no Nazis, no racism, no sexism, no xenophobia and no discrimination, which can be seen as a direct result of Twitter’s inability to handle harassment and abuse. The one that I’m on, mastodon.cloud, just has one rule for now, which is to not be a jerk. Other instances could very well set their own rules too; it’s entirely up to the admins of that instance.

“I was a heavy Twitter user since 2008,” says Rochko. But Twitter kept making bad decisions, he says, like changing Tweetdeck, closing down a third party app ecosystem, adding ads and even introducing algorithmic timelines. “Twitter was really trying hard to be not-Twitter,” he says.

The idea of social media companies straying too far from what makes them unique is a problem that seems to be endemic across all the big networks right now. The algorithmic timeline, for example, is a feature that Twitter took from Facebook. Changing up its Direct Messaging service to add read receipts and customer service chatbots are other ways Twitter has attempted to match its social networking rival. 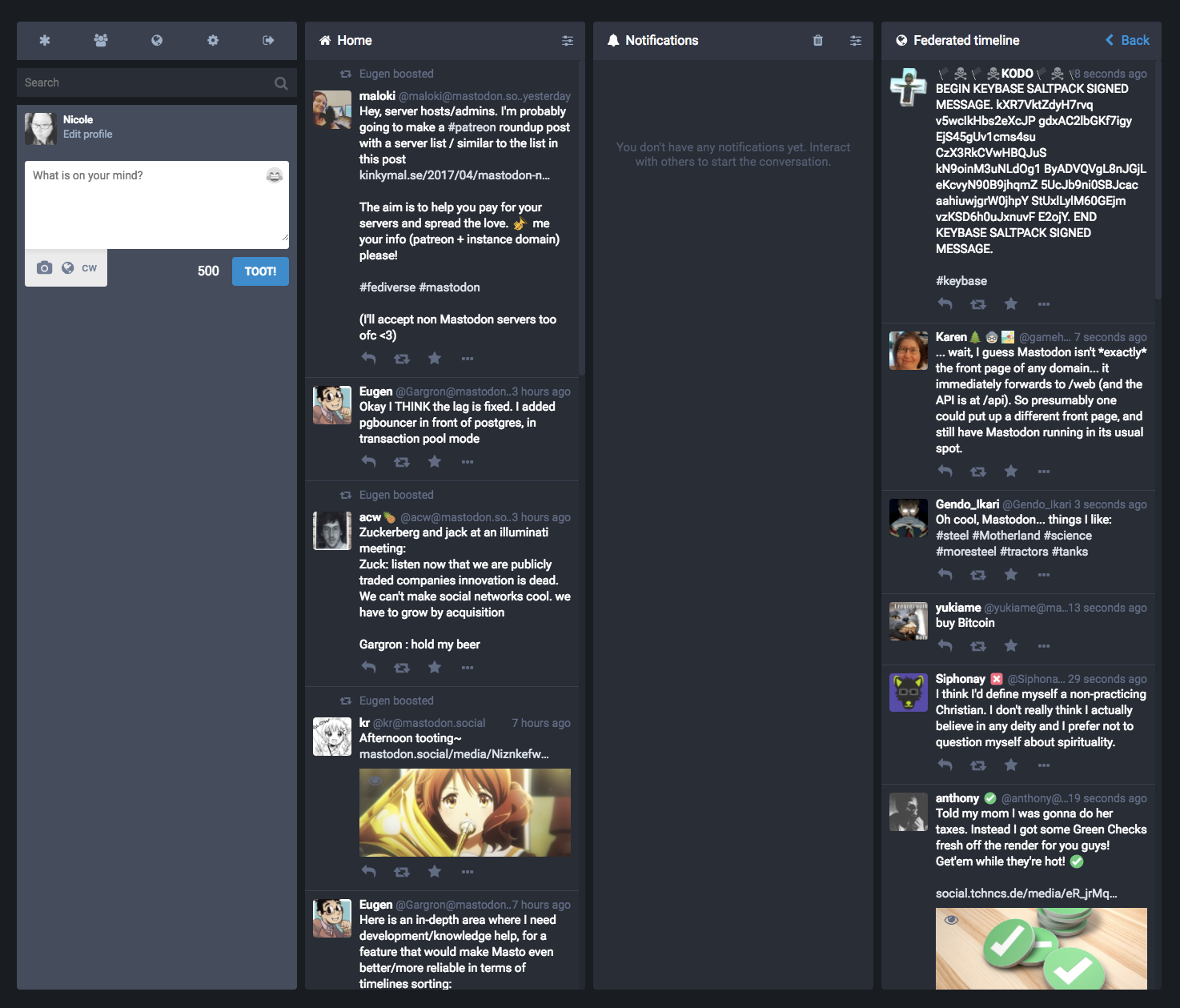 Facebook has been trying to make itself more Twitter-like too. Instead of being just a tool for friends and family, Facebook has become a place for news, which is a characteristic that used to be Twitter’s forte. Combine this with Facebook becoming more and more like Snapchat with the introduction of Stories, and it’s easy to see why some people seem to think that all social media are just copycats of each other.

Mastodon is not the first to come along as an alternative to the social media malaise either. Ello, Peach, and app.net (basically a paid version of Twitter) have all pitched themselves as substitutes. And, for awhile, each of them generated a small amount of buzz. But because they were much too similar to the services they were trying to dethrone, they offered essentially just more of the same.

“I believe the important part [with Mastodon] is the ideological shift. Open web. Federation / decentralization. Free software,” says Rochko. Mastodon isn’t the first network with this ideology. Diaspora promised a similar idea as a Facebook replacement, though it never quite took off due to buggy software, a poor interface and terrible communications. It still exists, but there’s not much adoption. The question is, can Mastodon do things right?

Well, there are a few issues. For one thing, there could be duplicate usernames in different instances. So if you’re @johnsmith on mastodon.social for example, there very well could be a completely different @johnsmith on mastodon.cloud, which is a problem if you don’t want people impersonating you. Also as I’ve mentioned before, Mastodon doesn’t work the same way as other social networks — your post can’t be seen by everybody on all instances, only to the ones that its users have federated with (Rochko delves into this a little deeper here). And, yes, for now, you can’t easily delete a Mastodon account after you’ve created it, which is a big deal for those who value data privacy.

Yet, for the past few days, Mastodon has been on an upward trajectory. There are already hundreds of different instances, and several have tens of thousands of users. Rochko even had to shut down the main mastodon.social instance to alleviate server stress and to encourage users to get on other instances to distribute the load.

Of course, the numbers don’t really compare to the millions of users on Twitter and Facebook. With all of its complexity, it’s unlikely Mastodon will become the new social media giant. But it really doesn’t need to be. Rochko has no desire to make money from this endeavor. He’s happy with the modest $2,157 he’s getting a month from his Patreon, which is enough to pay for his living expenses. There’s no telling how long the funds will continue, but since Mastodon is open source, it could very well live on with or without Rochko at the helm.

Even if Mastodon doesn’t make it to the big leagues, however, it still sends an important message that the big networks need to stop copying each other and start listening to its users. Instead of doing what investors and advertisers want, perhaps Twitter and Facebook should do what its community wants.

“The time is simply right,” says Rochko. “People haven’t been happy with commercial platforms for awhile, especially Twitter, but until now they didn’t see any viable alternative. Now finally there is one.”