Let's Go Candy Guide – How to Max a Pokemon's Stats

Vitamins are out and Candy is in for Pokemon: Let’s Go, Pikachu and Eevee. This Pokemon game’s candy goes far beyond the typical Rare Candy and adapts some of Pokemon Go’s systems while also introducing its own.

While exploring Kanto you’ll be able to find three kinds of candy: Rare Candy, species-specific candy, and stats candy. The stats candy aren’t officially called that, but as those have no known name, we’re calling it that for now. All candy change a chosen Pokemon‘s stats. 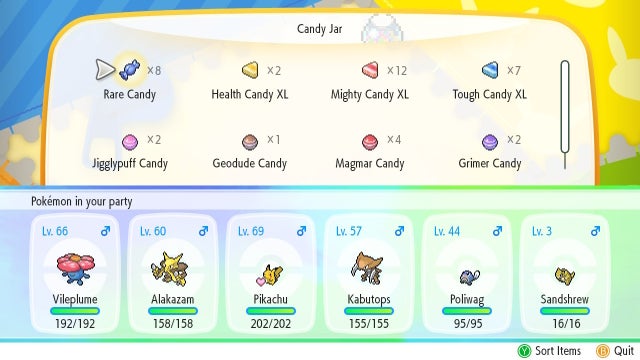 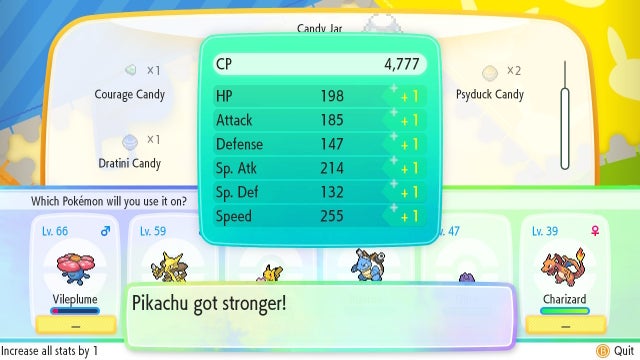 A Pikachu Candy was used in the screenshot above.

Aside from Rare Candy, the easiest way to get candy is by catching lots of Pokemon. Combos award more candy than catching Pokemon randomly. Learn more about combos on the Pokemon: Let’s Go Catch Combo Guide. 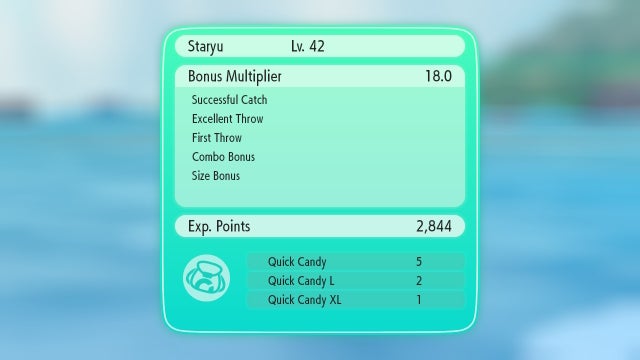 Once you’ve looked over the Pokemon you caught, send the extras to the Professor for even more candy. Professor Oak will send you bonus candy if you’ve sent him a lot of one species of Pokemon.

Candy can be used to increase all of a Pokemon‘s stats by an extra 200! These points are reflected immediately, so if you grind for candy, you could hypothetically increase a low-level Pokemon’s stats so much that it can take on a Pokemon dozens of levels its senior!

If you’re looking to increase your Pokemon‘s Speed or Special Defense, you’ll want to make sure you’re catching the right kind of Pokemon to get candy that’ll help you achieve your goal.

There are three sizes of Stats candy:

And there are several kinds of candy you can find in those sizes. Below is a chart of each stats candy type and which Pokemon we recommend catching to farm them. It’s best to work on getting a catch combo with Pokemon that give you a lot of Exp or yield a candy you need. Be sure to check the Pokemon: Let’s Go Catch Combo Guide for more information.

To see every candy each Pokemon drops, please visit the List of Pokemon in Let’s Go (Pokedex). Candy are added as Pokemon are caught.

Is there a Pokemon you like to farm for candy? Let us know in the comments below, or feel free to sing in and add it to the chart by editing the page. More Pokemon suggestions will be added as they’re found.