iOS 11 is such a mess, Apple showcases a bug in latest iPhone X ad


Think iOS is buggy? You’re not alone, and the bugs are now so commonplace that Apple didn’t even spot the cameo appearance of one in its latest ad for the iPhone X.

Must read: Meltdown and Spectre — Is your PC vulnerable?

The bug, which was spotted by the eagle-eyes of Benjamin Mayo of 9to5Mac, involves the text of an iMessage briefly appearing outside of the notification bubble on the lock screen.

What’s doubly embarrassing for Apple is that Mayo says that he reported this bug “months ago” and Apple closed the bug report.

Here’s the ad (the bug is briefly visible at the 50 seconds mark):

Here’s a closeup of the bug in action:

Now, I’ll be the first to admit that this is a small thing. Compared to some of the bugs that iOS has suffered as of late (and for that matter, some of the bugs it still has), this is nothing. But it’s significant for a number of reasons:

A report earlier this year claimed that Apple was postponing some of the major features it had planned for iOS 12 in order to concentrate on fixing bugs in the code. That might be for the best, but it’s an indictment of Apple that it let things get into such a mess in the first place.

Just over the last few weeks of the year, we saw both macOS and iOS hit by several high profile bugs. And what’s worse is that the fixes that Apple pushed out themselves caused further problems.

And this is just a selection of the bugs that users have had to contend with over the past few months. I’ve written at length about how it feels like the quality of software coming out of Apple has deteriorated significantly in recent years.

I’ve said it before and I’ll say it again, bugs happen. It’s a fact of life. But over the past few years we’ve seen a serious decline in the quality and cleanliness of the code coming out of Apple. And while it’s easy to make excuses for the many — many — visual bugs in iOS, it’s also hard to escape the fact that a lack of care over the small things leads to bigger and more serious problems.

“Apple owes a lot of its current success to its dedicated fanbase, the people who would respond to Windows or Android issues with ‘you should buy Apple, because that stuff just works.’ Shattering that illusion for those people won’t be good in the long term, which is why I think Apple needs to take a long, hard look at itself in the run up to 2018 and work out what’s been going wrong and come up with ways to prevent problems from happening in the future.”

That time is now. 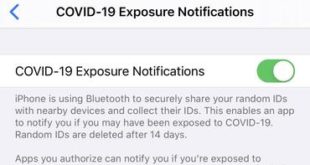 Apple on Wednesday released a developer preview of iOS 13.5 that includes the first version ...