ELECTRONIC payment firms got a big boost when India abolished most of the country’s banknotes last year, but rival state-sponsored e-payment services are forcing them to raise their game to hang on to their new customers.

Until November’s move, which scrapped 86 percent of all notes to foil counterfeiting and the black market, more than 90 percent of transactions in India were in cash.

Electronic payments providers such as market leaders Paytm and MobiKwik, and smaller players FreeCharge, Citrus, ItzCash and Oxigen, seized the opportunity, snapping up millions of customers and merchants caught out by the sudden shortage of cash.

Now the government is rolling out three tools to facilitate rival cashless transactions, including a United Payments Interface (UPI) app that simplifies inter-bank fund transfers, and Aadhaar pay, a bank-linked payment service that relies on the national identity card and can be used with just a fingerprint.

It has also promoted Bharat QR, another bank-linked service that uses machine-readable labels as the base for a simple payment system, helped by Visa and MasterCard. It requires only a smartphone and is aiming to sign up two million merchants by September.

The UPI app was downloaded more than 17 million times within two months of launch, and transaction values jumped 18 times between November and January, albeit from a low base.

So e-wallet providers such as Alibaba-backed Paytm, the largest, with more than 200 million clients, are adding services to stay a step ahead.

Paytm is betting that its licence to set up a niche bank so it can pay interest on deposits – and connect its systems with the UPI network – will help, and it knows it will need extra services to make the business profitable.

“The point is that e-wallets as a standalone business will be massively risky and not viable,” said Vijay Shekhar Sharma, founder and Chief Executive of Paytm. 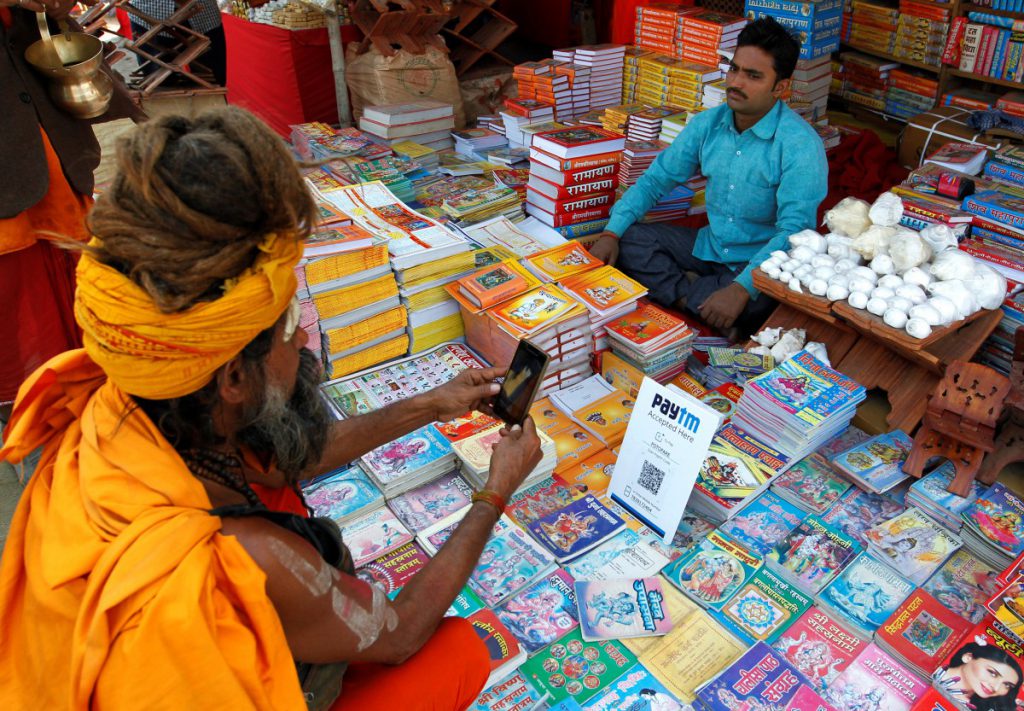 A Sadhu or a Hindu holy man pays the vendor through Paytm, a digital wallet company, after buying a book during the annual religious festival of Magh Mela in Allahabad, India, Jan 26, 2017. Pic: Reuters/Jitendra Prakash

In the early stages of their build-up, the companies haven’t even paid lip service to viability – giving a free service to customers and merchants, while burning through their start-up funding. Their only source of income has been commissions on phone and utility bill payments.

Paytm’s parent company has raised US$675 million from Alibaba and more from others, and says its current valuation is about US$5 billion, but it has lost about US$230 million over the last financial year. MobiKwik, part-owned by American Express and Sequoia Capital, has raised about US$80 million and is eyeing a US$1 billion valuation as it holds talks with investors for more funding.

Both have waived fees to enable free money transfers from wallets to bank accounts. Paytm says transfers within its wallets and accounts will be free forever.

And they have been using cash discounts and freebies to lure customers.

Mumbai-based management teacher Christina Sundaresan says she started using Paytm when the government pulled the plug on notes, and now uses it so frequently she gets a free movie ticket each weekend.

“My laptop repairer, the vegetable vendor and the medical store are all accepting Paytm, so it works well,” she said.

But she says she would consider other payment options, including UPI.

That will make it difficult for Paytm to withdraw the freebies, but they can’t keep burning cash.

“You can’t have a business that says ‘pay a 500 bill and take 250 cash back’,” said Aditya Puri, head of third-biggest Indian lender HDFC Bank, which has its own payment app.

MobiKwik, which started as a simple digital wallet, is looking to partner with mainstream banks to market a host of financial services on its platform, from mutual funds to loans.

It aims to triple its wallets user base to 150 million by end-2017, and raise the value of transactions five times to US$10 billion.

It thinks its head start and extra services will keep it on top of the competition, and that banks, latecomers to e-payment, will struggle to match the scale of its operations and vendor network.

“UPI is a solution for bank transfers. UPI is not a payments ecosystem today, as there are no merchants on UPI,” said MobiKwik Chief Executive Bipin Preet Singh.

Dhruv Chopra, managing director at the Indian unit of South African payments solutions provider Net1, which has invested in MobiKwik, is also betting the start-ups will be too nimble for the banks.

But with a large number of small players, many will not survive, he said.

Avnish Bajaj of venture capital firm Matrix Partners, which has investments in payments companies ItzCash, Mswipe, and ride hailing firm Ola, which has its own e-wallet, agrees there will be a clearout under competitive pressure.

“There’s going to be a bit of consolidation in the e-wallets space in the next two years,” he said. – Reuters

Previous Oculus CTO John Carmack is suing ZeniMax for $22.5 million
Next The Ken wants to fix business journalism in India with a subscription model