Hunt: Showdown is a Cool Mix of Several Genres

I’ll be honest and say that I was not expecting the coolest thing I saw at E3 to be a multiplayer shooter. But it was – even though calling Crytek’s Hunt: Showdown just a “multiplayer shooter” is a massive understatement. Hunt is an intricate blend of an survival shooter, team exploration, and dynamic open-world horror, with just a pinch of a rogue-lite RPG thrown in to boot – and this spooky hodge-podge looks fun as hell.

Set in the late 1800’s, you’ll play each match – which allegedly lasts anywhere from 15 minutes to a half hour, though they could probably go longer –  as a professional monster hunter, contracted to banish some foul evil that’s crept into our plane of existence. While the lore may seem a little fast-and-loose at this stage, it’s a great setup for us to be dropped into the murky Louisiana swamp that serves as the game’s play area. “It’s not a very pristine environment we’re going into,” explains Dennis Schwarz, one of the lead designers on the project, referring to the more romanticized versions of London or American cities we so often see in games set in that time period. “We’re not going where everybody else is going in that era, we’re going into swamps.” 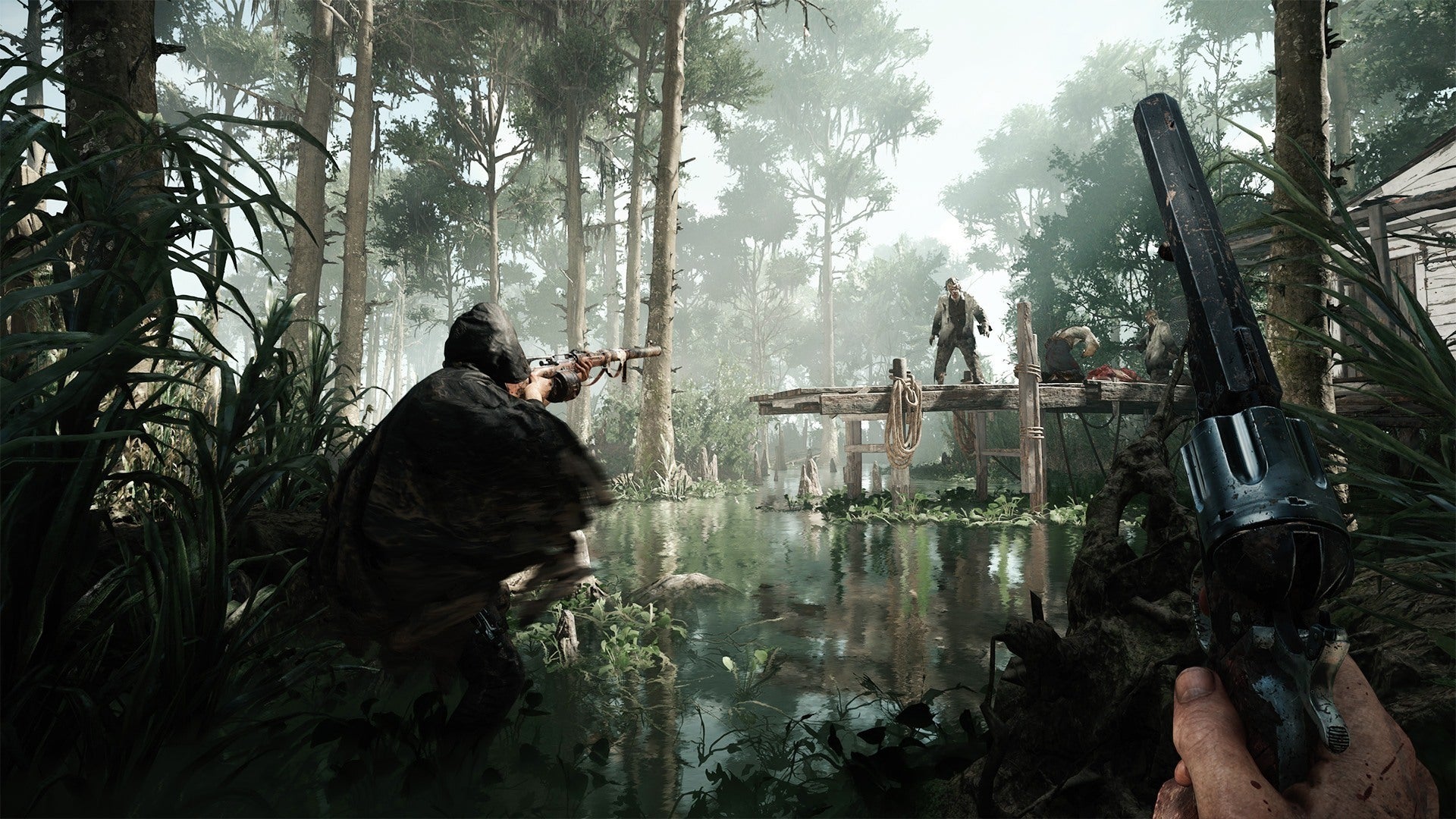 Once you land in that dark brackish water, the basic gameplay loop is simple: get in, find a monster, kill and banish it, then get out with your bounty. The real difficulty comes from the fact that while exploring the (roughly) square-kilometer map,  you’ll also be fighting lesser beasts, like zombies, giant leeches and more (the most interesting was some poor soul who’d essentially become a living hive for bloodthirsty giant mosquitos) – as well as everyone else in the match with you.

Even if you’ve been to a similar location before, there might be a very different encounter there.

In our demo, the pair of hunters – you can play in teams of two or on your own, and the matchmaking system will put you into matches with up to ten players – spent the first half of the match quietly avoiding any other players they saw in the swamp. Not that this was a requirement, obviously – there were plenty of gunshots ringing out across the map, and our hunters even came perilously close to an explosive dustup between multiple teams while raiding an abandoned supply store.

Target monsters are randomly decided every time out of an available roster of monsters, and dynamically placed at one of 15 potential locations across the fixed map, which range from dank bogs and swamps to thick woods to open fields and farms. “We experimented in the past with the procedural stuff with Gilded Age,” Schwarz said, referring to randomized tile-based maps of the initial version of Hunt that we saw in 2014. “In the end we went back to what we can do best, which is hand-crafted levels… Even if you’ve been to a similar location before – there might be a very different encounter there.”

Our hunter’s target ended up being a giant spider that had made a nest in an old barn – and it was one of the most terrifying game arachnids I’ve seen in recent memory. Instead of slowly aggro-ing like a standard “Giant Spider Boss,” this one behaved… well, like a giant f**king spider.  The barn was dark and dilapidated, and the creature would skitter into, out of and around our flashlight’s beam, using holes in the walls to quickly escape after surprise attacks.

Once you do kill the creature, you’ll have to banish it. Banishment is a process that takes around one minute to 90 seconds, and during that period, every player in the game is made a ware of your exact location. If you can survive the countdown timer, you’ll be presented with an extraction location. Reach the getaway wagon and you’ll receive a huge payout of cash and XP – but if you die, don’t expect to be getting up any time soon.

In a match, you’re playing as one single hunter on a job. Here, you’re managing a monster-hunting agency.

Hunt: Showdown features permadeth…. Sort of. If your hunter gets killed while on a mission, that’s it – they’re dead. All of their skills and abilities, plus any weapons and gear they had on them are gone forever. That said, that doesn’t mean all of the time and energy you invested into them was done in vain. The game uses what it calls a “Bloodline” system – basically a lore-friendly way of referring to your player profile – to manage your player level, bank the experience that you’d earned before getting killed and recruit different monster hunters as needed.

You might lose a hunter who you’d played with for a long time, but the XP you earned with them will allow you to hire a new hunter with a higher level, whose base stats are much higher than the previous one’s. Different hunters will have different starting bonuses, too – one might come with a powerful sniper rifle, or have the ability to dual-wield pistols, and you can equip and send them into missions as you see fit. Consider it this way: if in-game you’re playing as a hunter assigned to that one contract – when setting up your Bloodline, you’re managing a monster-hunting agency.

It’s doubtful we’ll see a final version of Hunt: Showdown any time soon – the team has information regarding public testing is “coming soon,” but that could be anywhere from next month to a year from now. Regardless, I’ll definitely be keeping an eye out for any announcements – especially if it means I might get to squash that giant spider for myself.

JR is an editor at IGN. He’s used to fighting monsters while he writes our wikis, and routinely tweets mean things about them.