How to Make Money in Red Dead Online

There are two types of currency in Red Dead Online: Cash and Gold. Even after the latest update, weapons, clothing, and horses are extremely pricey.

While there are a ton of fun ways to make money in Red Dead Online, like completing Stranger missions and competing in races or Showdown matches, the rewards for those activities don’t necessarily dole out a ton of bang for your buck.

Whether you’re running low on cash, just starting out and need a bunch of cash quickly, or have finished the story and are trying to fatten your wallet, here are some of the best and fastest ways we’ve found to make money in Red Dead Online.

How to Make Money Early In Red Dead Online[edit]

The best way to make a bunch of money early on in Red Dead Online will sadly throw your Story experience a bit out of whack. You’ll still be able to play through it in your own time, but first you’ll need to play a few random missions. 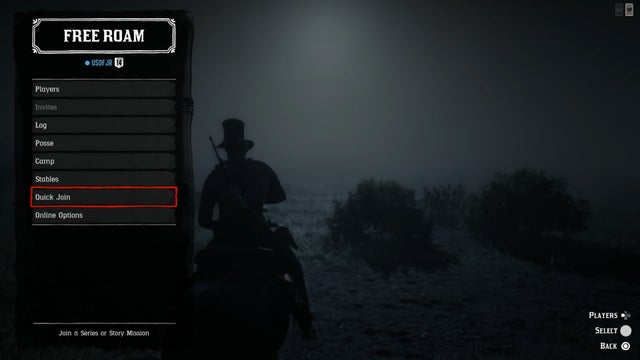 The late-story mission Kill Them, Each and Every One offers a first-time reward of $250. You’ll want to join a queue of story missions by pressing left on the D-pad and selecting Quick Join, then select Story Mission On-Call. 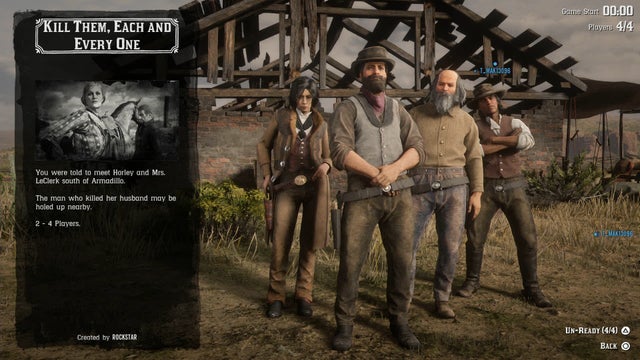 This will randomly queue you into other players story missions – you’ll earn between $20 and $50 for most missions, but you’ll want to keep at it until “Kill Them” comes up. This sets you up well to save some extra cash and unlock the Bolt-Action Rifle once you reach level 7.

The Fastest Way To Make Money In Red Dead Online[edit]

Despite the recent economy changes, hunting in Western Lemoyne still remains as one of the fastest and most reliable money making methods currently in Red Dead Online. 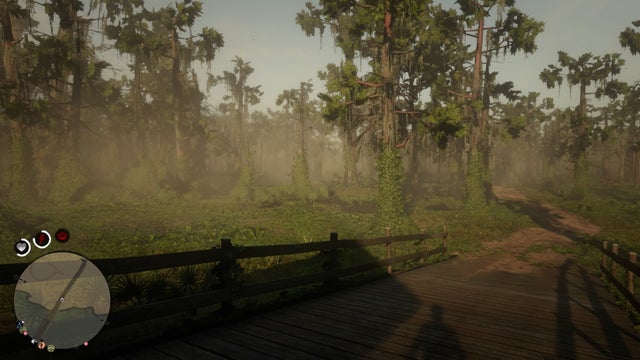 While this method relies very heavily on animal spawn rates and kill perfections, you can expect to make anywhere to between $240 to $400+ per hour. Some players have even claimed they are earning anywhere between $40 to $60 every 10 minutes.

While that is a pretty big margin to go off, in most cases you can expect to range more around the middle of those two prices. 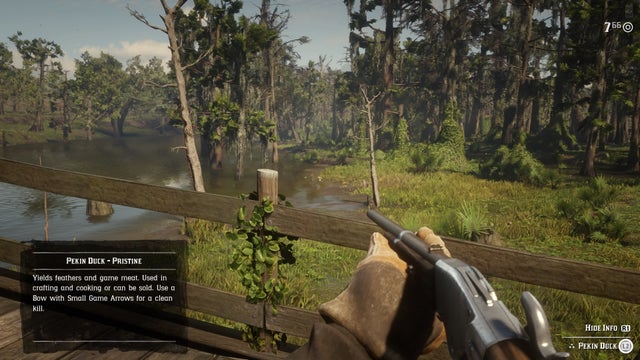 Seen on the map below, you will find several different animal spawn points just over the bridge that is East of Rhodes. Animals such as Alligators, Heron, Eagles, Pekin Ducks, and Spoonbill have been known to frequent the area. Simply kill them, collect their remains, and make your way to the Butcher in Rhodes. Repeat this step and it won’t be long before you start noticing your money piling up.

While other weapons have proven to work just as well, our weapon of choice for this particular method has been the Varmit Rifle.

The items that you can expect to loot from a single Spoonbill – which is one of the more frequent animals that you will find in the area.

Assuming that you obtain a perfect kill, each Spoonbill can net you approximately $11.00.

It’s important to note, that in some cases the Spoonbill and other wildlife may not spawn in this area. Should this be the case, simply ride away from the area and return, this should respawn the wildlife in the area.

Far and away the easiest way to make money in Red Dead Online is to find yourself a Treasure Map. 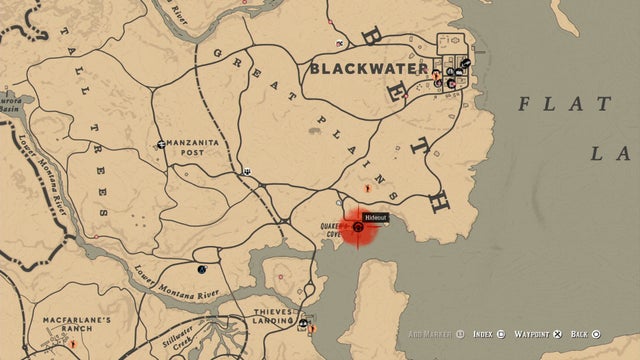 To do this, you’ll need to stumble upon a Gang Hideout in Free Roam. These are randomly spawned at a series of locations around the world, such as Quaker’s Cove in West Elizabeth or between Armadillo and Mercer Station in New Austin. 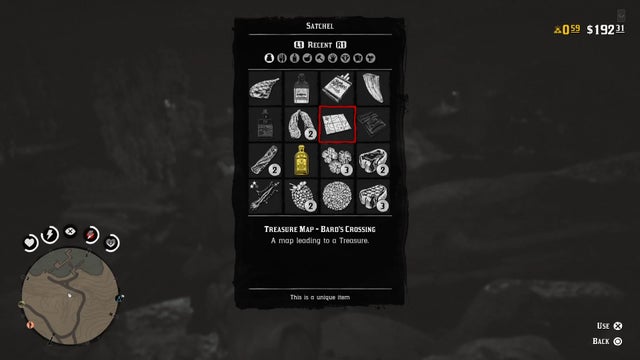 Kill (or spare) the bandit leader in each hideout to receive a Treasure Map – while it’s been reported that “spare” offers more frequent map rewards, our experience so far has been about 50/50. 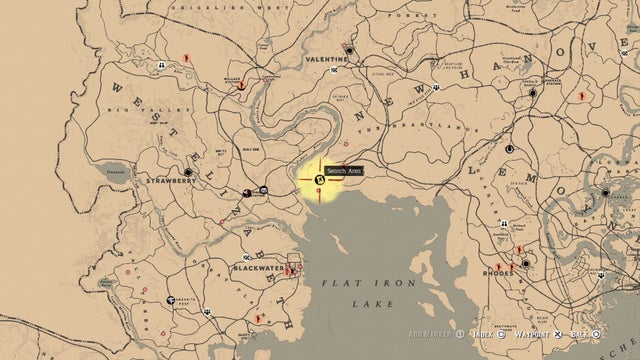 You can “use” in your Satchel to reveal the location of a hidden chest somewhere in the game world. Travel to this area and hunt down the chest to find a stash of cash, some helpful items and roughly half a bar of Gold.

Coming in at around $175 an hour after the recent economy changes, Salmon fishing still remains as a somewhat profitable money-making method despite the nerf from $300 per hour.

Unfortunately, this method does have one particular requirement that may be quite the challenge for some players to obtain early on in the game. To begin Salmon fishing, you must first be at least rank 14 in order to purchase the fishing rod, and at least rank 30 or have access to One Gold Bar to purchase the Lake or River Lure. 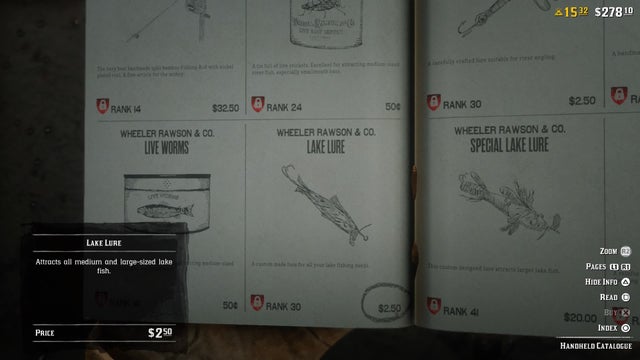 Don’t worry too much about which specific lure you purchase, as both have been tested to work at the same rate.

While there are many different locations in which Salmon can be caught, we have taken a liking to the Owanjila area as it is not only out of the way of most players, but it is also close by to a major town, which is definitely a bonus considering that it will significantly cut down on travel time when compared to other locations.

If you would prefer to try a different location, don’t forget to check out the Dakota River just Southwest of Valentine, along with O’Creagh’s Run which can be found West of Annesburg in East Grizzlies.

Once you have your ten-sack of Sockeye Salmon, you can begin to make way to the Butcher in Strawberry and sell your load for $25.00, which isn’t too bad for a pretty simplistic money making method that allows players to relax. 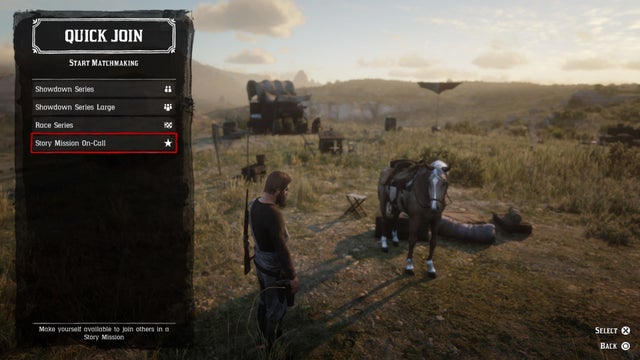 This particular method is pretty straightforward, as completing missions with other players – whether it be with a random posse or with friends – can actually land you a rather surprising amount of money.

To get started with completing missions with other players, simply press the Left D-Pad to open the Free Roam menu. From here, select the Quick Join option, followed by Story Mission On-Call. Once you have been matched with four other players – any remaining slots will be filled with a random player should your posse not be full – to complete a random Red Dead Online mission.

Depending on who you are matched with, you may potentially be completing missions that are more towards the end of the game, which will in turn provide higher rewards.

Most standard missions will net you anywhere from $30 to $50, however, we have encountered missions that offer upwards of $100 to $250 for no more than 20 minutes work – and that’s being very lenient.

It’s important to note though, that dying and restarting missions can affect your rewards, so keep that in mind should you be one to take risks.

It’s also important to mention that you can only receive money once per mission. Should you encounter the same mission more than once, you will only receive XP as a reward. 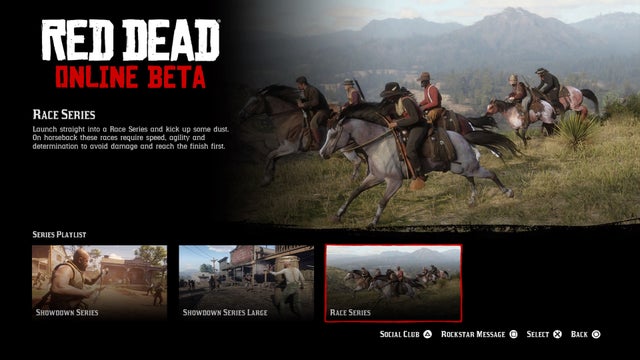 Yet another way to earn some quick money is to complete the Race Series events that can be found around the map – identified by the checkered black and white flag.

There are three different types of horse races that you can complete:

This method can currently earn upwards of $50 per hour. While it is not great, it is definitely a method to consider if you are short on cash.

In order to complete a treasure map, simply head towards to marked location on the map and search for a hidden lock box in the area.

In most cases, you will receive anywhere from $50 and $100, along with pieces of gold and several other sellable pieces such as jewelry.

At current, there are three different ways that treasure maps can be found in Red Dead Online. As we already know, you will receive a treasure map during the opening introduction to Red Dead Online, followed by a free one in the post when you reach Rank 10, as well as raiding bandit camps.

When raiding a camp, it is important that you always try to keep the leader alive, as they will often provide you with a free treasure map. There is also the possibility of looting a treasure map from fallen bandits in the area. 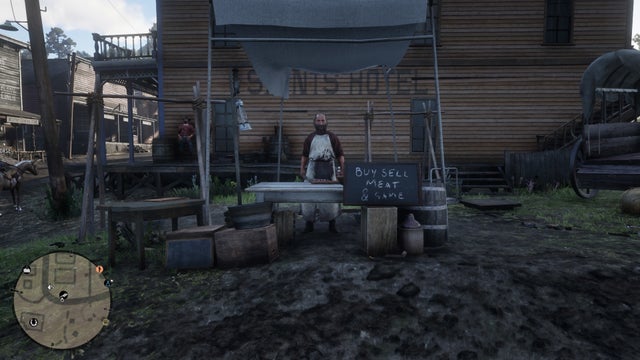 Much like Red Dead Redemption 2’s single player, you can also sell pelts in Red Dead Online. If your heading close to a town, make it a point to always kill an animal on your way, as their pelts, depending on the quality, can earn some quick cash by selling them to a Butcher.

While this definitely isn’t a method that will make you rich, it will instead be a great way to earn extra cash on your travels.

It’s important to note though, that any pelts you may have stowed away will be lost when fast traveling or leaving a session.

It’s also important to remember to always use your Bow when killing animals, as it will in most cases provide the best possible quality, earning you even more money. 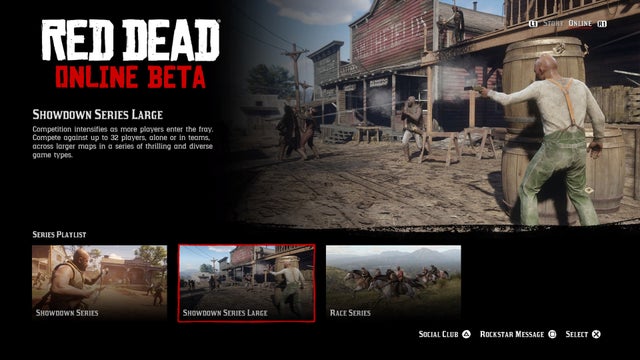 If your looking to earn some extra cash, taking part Red Dead Online‘s different game modes is a great way to earn a few extra dollars.

Each round takes approximately 10 minutes to complete and depending on if you win, you earn anywhere between $6 and $40+ every round.

As slow and painful as looting every kill may seem, you would actually be surprised at just how quickly those additional few dollars add up. Combine this with the additional loot that you often receive such as small trinkets, looting is one of the best ways to earn quick cash.

Get yourself a better ride[edit]

PS4 owners can get a free exclusive horse by going to the stables.