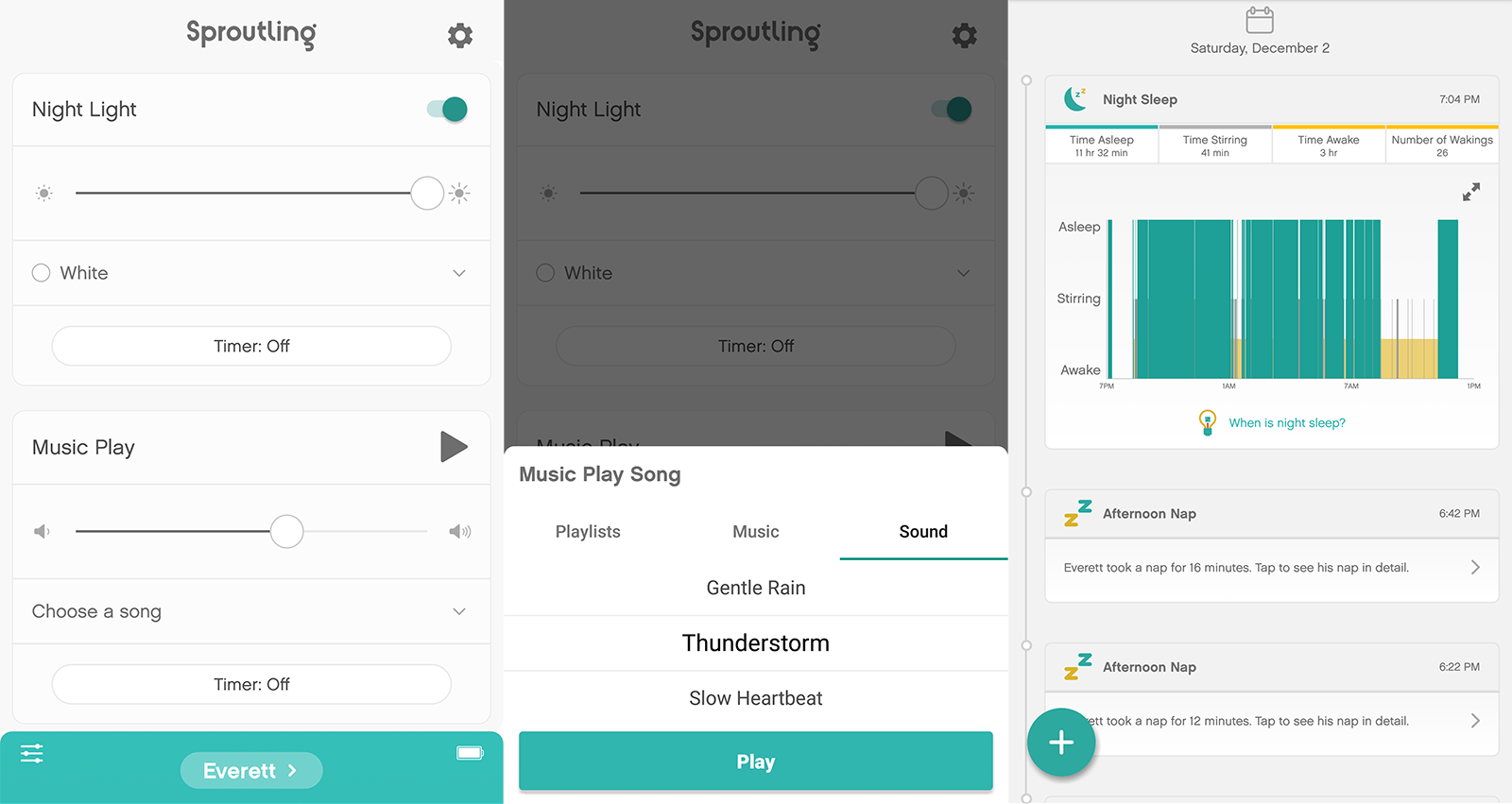 Credit where it’s due, the Sproutling isn’t a complete failure — I love the UFO-shaped “smart” charging base. Truth be told, though, it’s not really that “smart.” It’s basically just a wireless charger for the wearable that doubles as an app-controlled nightlight and sound machine. But it’s a really good sound machine. The ambient noise was a godsend for drowning out the rest of the noises in our small apartment. And seven times out of ten when my son woke up crying, putting on “Twinkle Twinkle” would lull him back to sleep.

You can choose from a sizable selection of classical tunes and lullabies like “Air on a G String,” “Twinkle Twinkle Little Star” and “Hush Little Baby.” Plus, a few generic “ambient” tunes and standard noise-machine sounds like white noise, thunderstorm and ocean waves. With a recent app update you can even choose playlists of songs and sounds and set a timer to turn off the machine after a period of time. 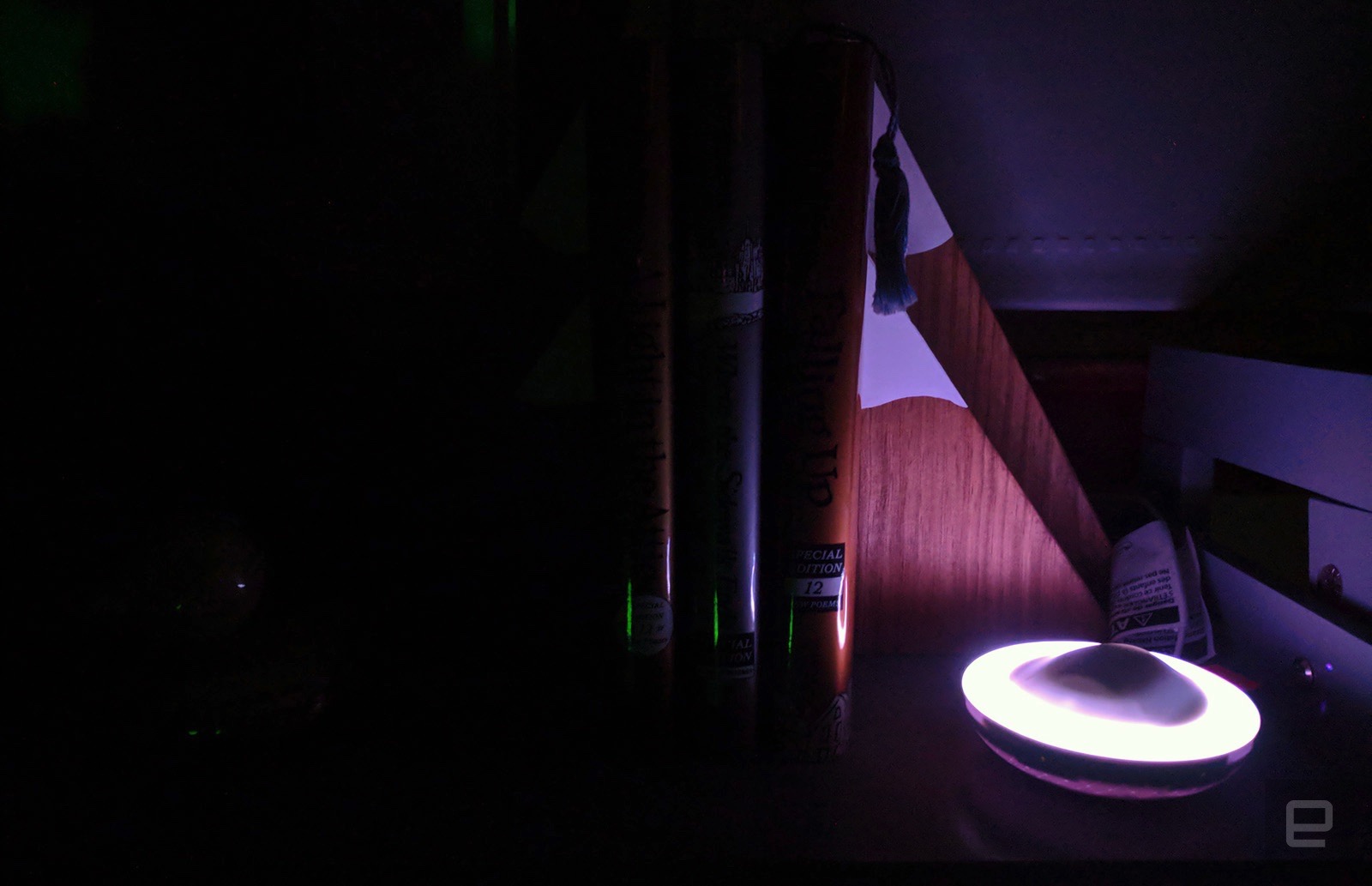 The night light is just as customizable. You can choose the color, set a timer and adjust the brightness (even cranked all the way up, it’s pretty dim). Because it only casts light upwards, it’s not going to stop you from tripping over toys on your way through the nursery, but it’s enough for changing a diaper in the dark.

In general the app is well designed and easy to navigate. And it’s incredibly simple to control all the various features and change your settings, even while you’re out and about. It means grandma and grandpa don’t have to install a new app just to babysit, but it also means you can mess with your brother-in-law by randomly turning on “Hush Little Baby” while he’s trying to feed a fussy child. 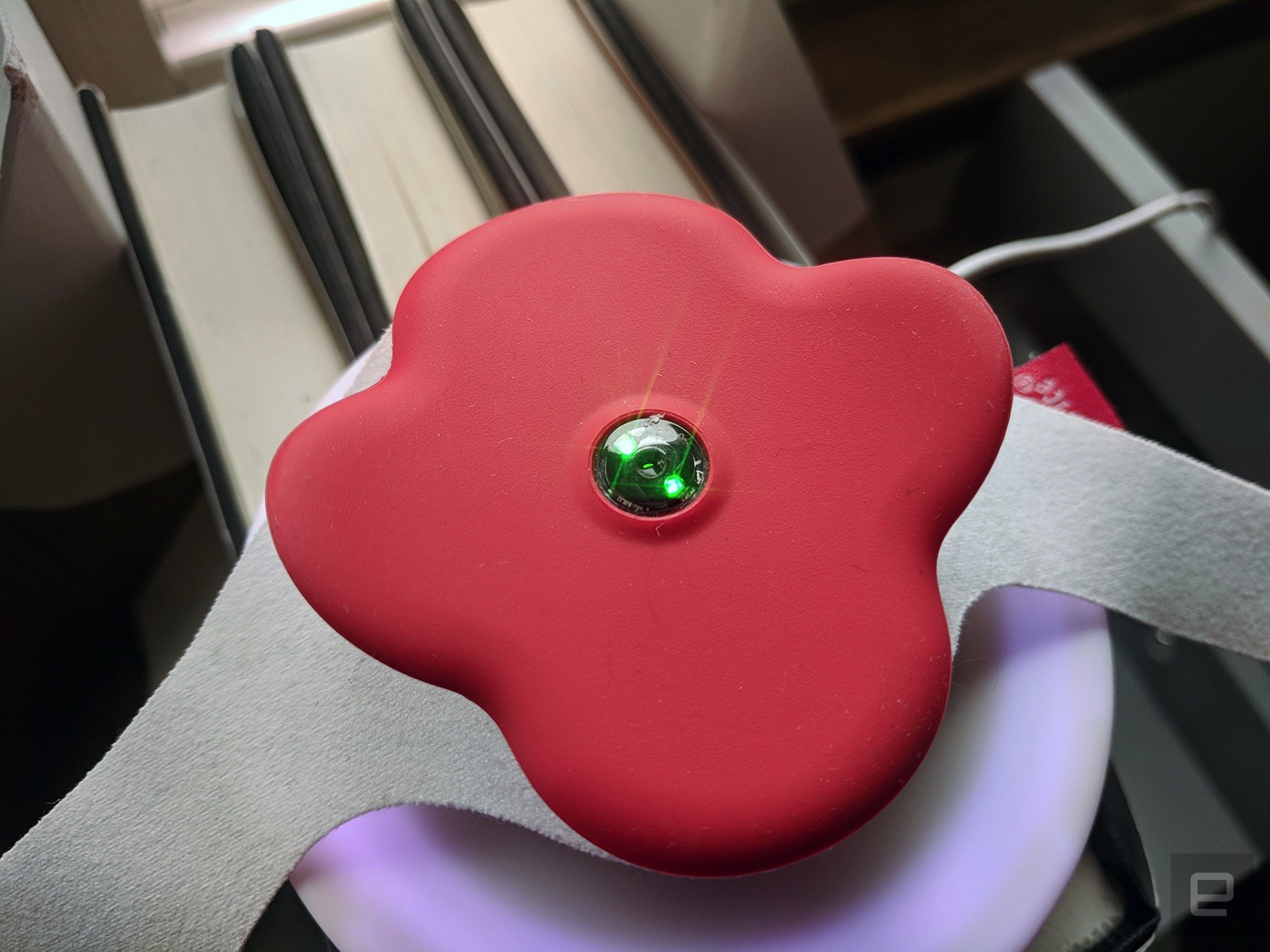 At the risk of being glib — literally everything else.

Let’s stay with the app for a bit. While a recent update has improved things somewhat, it’s still pretty buggy. It can be slow to respond, which, when you’re dealing with a screaming four-month-old at three o’clock in the morning is enough to make you throw your phone across the room.

It also has a tendency to log you out randomly. Again, first thing in the morning, when trying to change a diaper, the last thing you want to do is punch in a 13-character password on your phone just to stop the sound of gentle rain.

Things only get worse from here.

Arguably the most important feature of the Sproutling is its ability to alert you when your child falls asleep, wakes up, stirs or rolls over. None of these alerts ever went off with any predictability. Often notifications that my son fell asleep came in 15 minutes or more after the fact. And notifications that he woke up would arrive long after he was out of his bassinet and already getting his morning feeding.

As an experiment, my wife and I left the band on our son while he was with the babysitter. Over the course of the day, we got repeated notifications that he had woken up. I counted a grand total of 18. Strangely, my wife received even more — over 20. Somehow, despite tracking the same device, we didn’t get the same number of alerts. Things are even weirder when you consider that I got only three notifications that he had fallen asleep; my wife got six. Somehow my son woke up six times more often than he fell asleep. 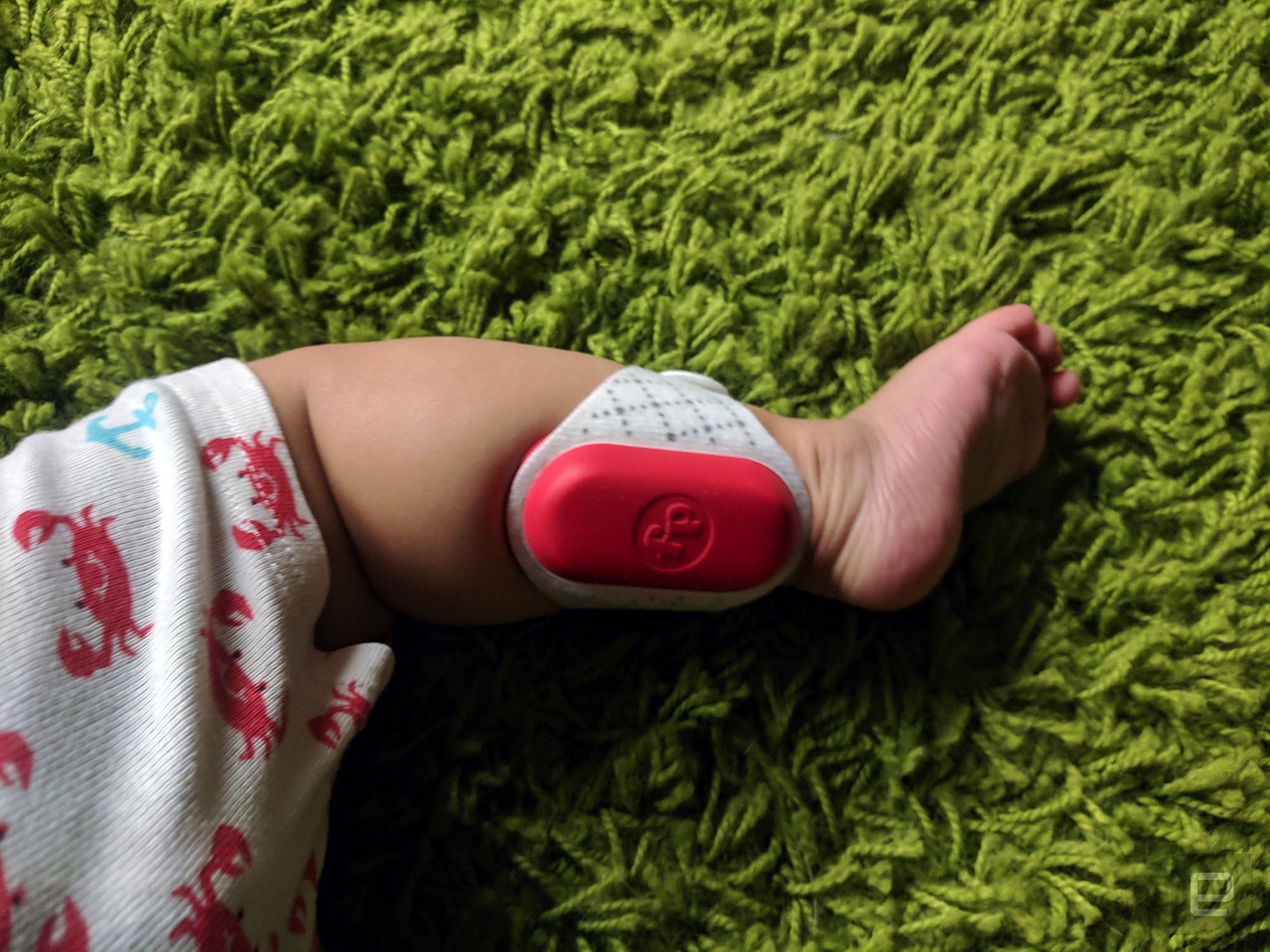 We’ve long since given up on the band, yet we still receive the occasional notification that he’s fallen asleep even while it sits untouched next to the base in the diaper cart.

As a paranoid first-time parent, I was particularly interested in the roll-over notifications. I’ve been warned enough times about not letting a newborn sleep on their stomach. And I have a few friends whose kids started to roll over just days or weeks after coming home. Fisher-Price refers to these as “red alerts” which, other than the color of the screen in the app, are no different from any other notification. They don’t override do-not-disturb unless you specifically go into your phone’s settings to change it. There’s no special sound. An alarm doesn’t ring from the base station. Basically, if the kid rolls over and you’re not clutching your phone in anticipation, you might miss the alert. One morning I woke up to three notifications that my son had rolled over in his sleep — none of them were enough to wake me or my wife. Thankfully, it doesn’t appear he actually had rolled over.

The grander promise is that Fisher-Price will collect enough data to predict your child’s sleeping pattern. That seemed to work well enough. The predictions were never terribly far off — the device knew he would wake up around 8am most mornings, but they were also largely useless. Once my son settled into a predictable routine, I didn’t need an app to tell me he was going to wake up at 2am like clockwork to be fed.

The most confusing part of Sproutling, though, is the pile of untouched technology just sitting inside the base. The base has sensors to measure temperature, humidity and light levels, plus a microphone. The mic is supposedly completely disabled in firmware and does not capture, store or transmit audio. Fisher-Price says it’s using the other sensors to collect data it hopes will lead to better sleep prediction algorithms and new features.

It seems like it would be easy to put a temperature display in the app so parents could make sure the nursery wasn’t too cold, or give users the option to turn on the microphone and use Sproutling as a proper audio-only baby monitor. Those are some basic features that any “baby monitor” should have. Right now, though, it seems like there’s a whole bunch of tools collecting dust inside its translucent white shell. 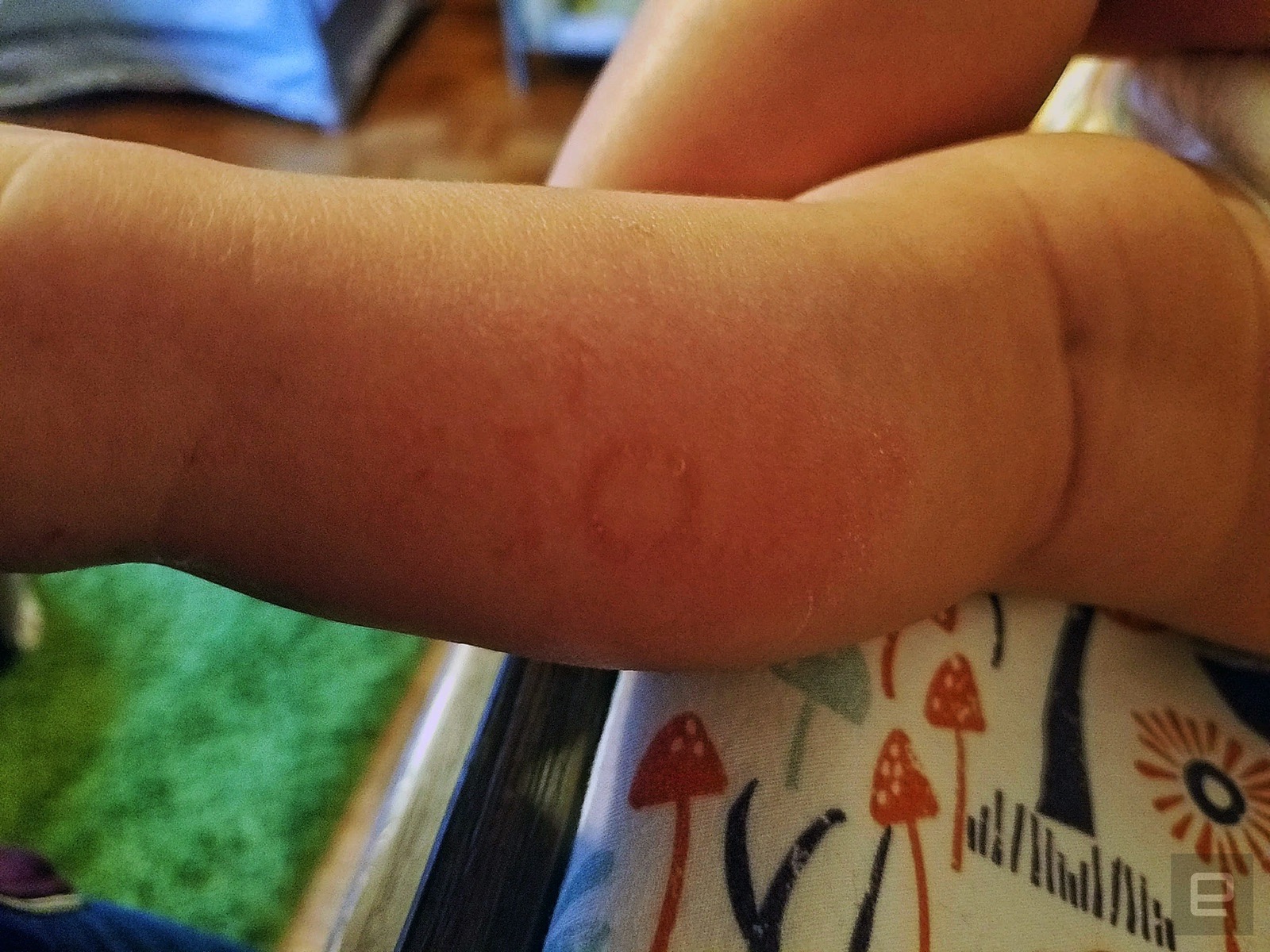 Now, I cannot lay the full blame at Fisher-Price’s feet. But, on at least three separate occasions he had pretty bad eczema outbreaks where the band rested. Cleaning the band, washing the sensor and alternating legs every night… it didn’t make a difference. After about three days of continuous use his skin would become red, scaly and irritated.

Being my son, he is prone to eczema outbreaks. I had it pretty bad when I was a baby too. But we’ve had little trouble keeping it in check everywhere else on his body. It’s only where the band was.

To make matters worse, the sensor itself left red rings on his calves. Even if the Sproutling delivered on its promise, it would have been cruel to subject my son to its side effects for extended periods of time. 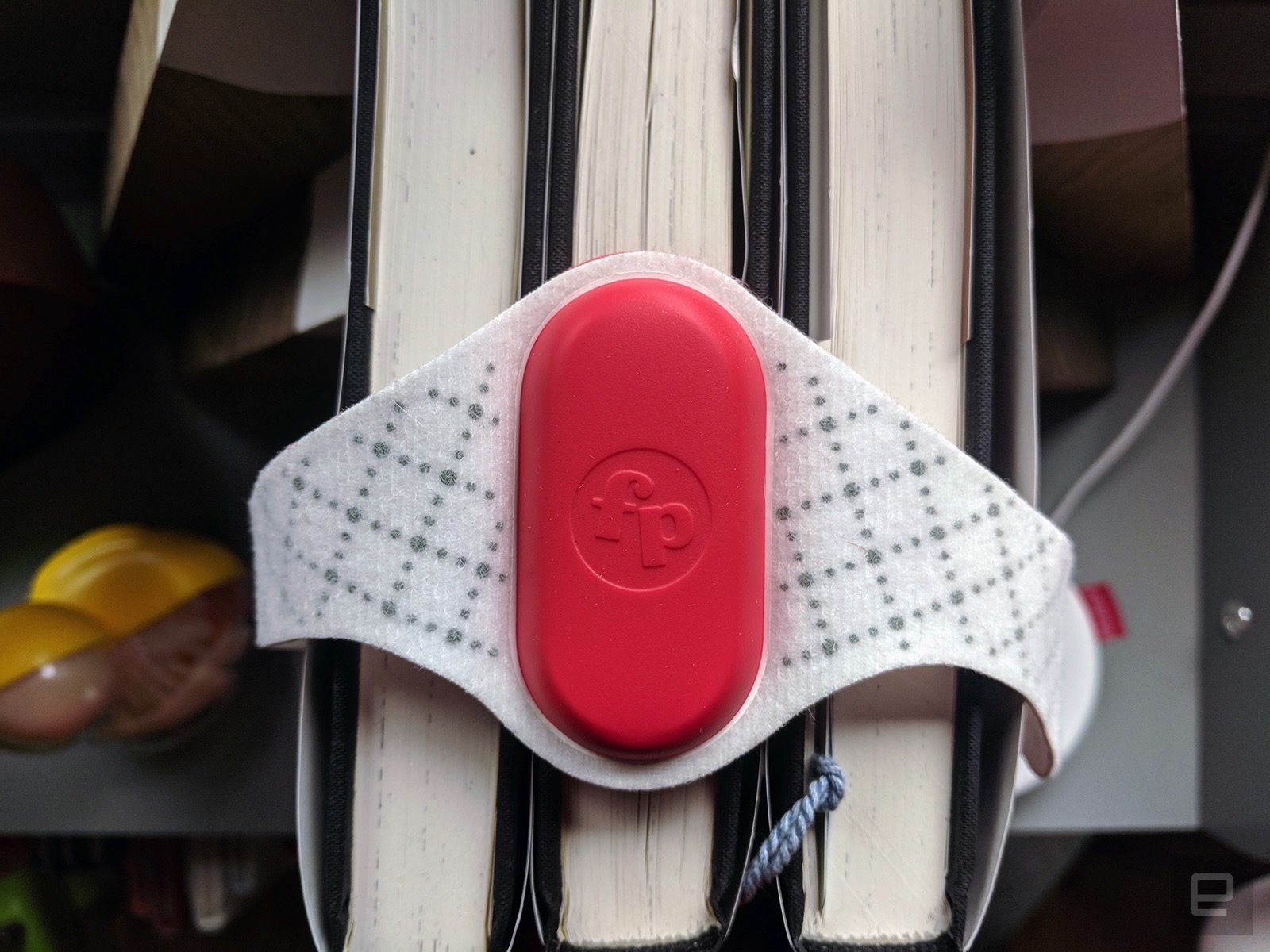 I’d gladly pay like $50 for a stand-alone Sproutling smart charger — it’s a simple, well-designed remote-controlled night light and sound machine. But the wearable fails to live up to any of its promises. You’d be better off spending that $250 on a proper video baby monitor (without WiFi, please) and a tricked-out sound machine.