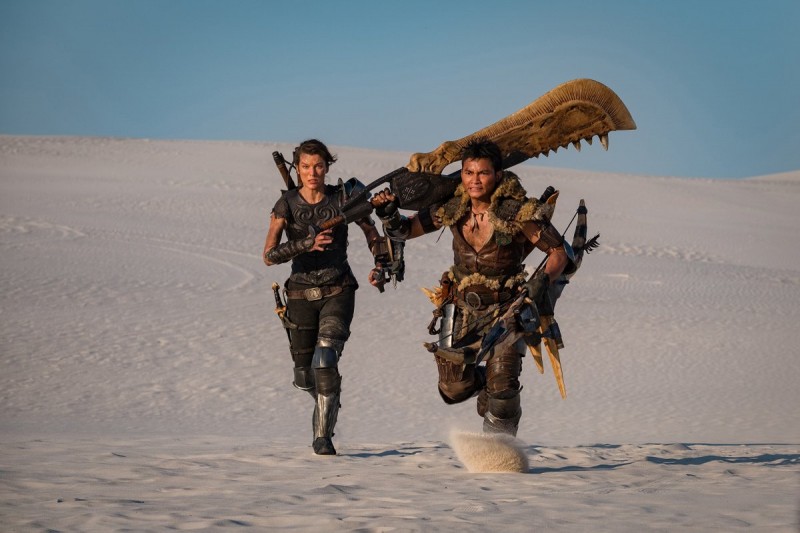 It seems like there’s a new image off the set of the Monster Hunter movie every few days, but this one is special. The first few images showed soldiers in Humvees holding guns as they traversed the desert, raising red flags for fans concerned about the adaptation of the game. Perhaps as a response, another image has shown up, which you can see above, courtesy of Sony’s Twitter.

The image shows Tony Jaa wielding a Giant Jawblade, which is a bone weapon, and a crossbow. Milla Jovovich is carrying a pair of dual blades on her back. The movie’s story follows a group of modern military soldiers discovering that monsters have invaded their world and can only be defeated by weapons made using the parts of monsters. Thus, they have to learn how to fight from actual monster hunters from another world, like Tony Jaa here.

“Behind our world, there is another,” says the official studio description, “a world of dangerous and powerful monsters that rule their domain with deadly ferocity. When Lt. Artemis (Milla Jovovich) and her loyal soldiers are transported from our world to the new world, the unflappable lieutenant receives the shock of her life. In her desperate battle for survival against enormous enemies with incredible powers and unstoppable, revolting attacks, Artemis will team up with a mysterious man who has found a way to fight back.”

Monster Hunter is not yet scheduled for release but is currently filming.