Breaking News
Home / Gaming / F' Batman?! All the Other Times Batman and Robin Broke Up

F' Batman?! All the Other Times Batman and Robin Broke Up

The not so Dynamic Duo.

Batman and Robin may have the single most iconic partnership in the superhero world, but their relationship isn’t all sunshine and roses. Take the new trailer for the live-action Titans series, for example. When Robin isn’t smashing his boot of justice into evil’s neck, he’s shocking audiences everywhere by saying “F*** Batman!”

That may be a particularly extreme case of Batman and Robin’s relationship turning sour, but there’s definitely a precedent here. Between his antisocial personality and his habit of letting sidekicks die on the job, Batman has had quite a few nasty breakups over the years. Here are the most memorable cases in DC’s comics, TV shows and movies. 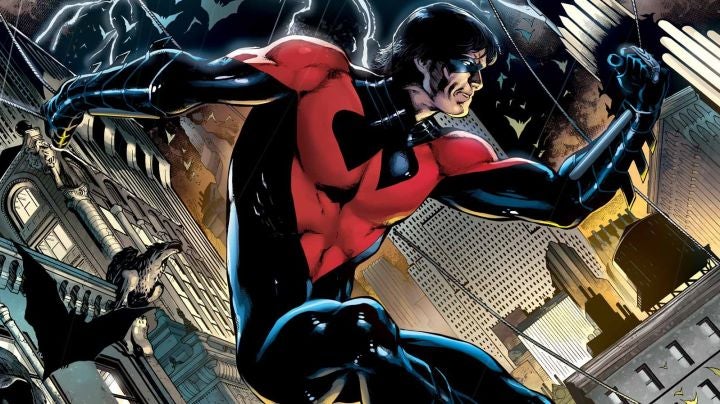 In pretty much every incarnation of the Batman franchise, it’s only a matter of time before Dick Grayson breaks away from Batman and tries to make it on his own as a hero. Invariably, he takes the name Nightwing, inspired by a legendary hero from the planet Krypton. That transformation first took place in 1984’s Tales of the Teen Titans #44, and it’s a story that’s been retold countless times over the years.

The Death of Jason Todd

It’s also a common trope in many incarnations of Batman for the Caped Crusader to replace Dick Grayson with a second Robin, Jason Todd. Sadly, that partnership never works out over the long term. Jason was killed by Joker in Batman: Death of the Family (a story whose ending was determined by fans calling in and voting). Jason tends to suffer a similar fate in any version of the Batman mythos in which he appears, though he also has a habit of returning to life as a revenge-hungry vigilante later on. Even the video game Batman: Arkham Knight used this trope as a major plot point.

Moviegoers got their first glimpse at what happens when the Dynamic Duo have a falling out in 1997’s Batman & Robin. This movie focuses a great deal on Dick Grayson chafing under Batman’s overbearing leadership style. Their tense relationship is further inflamed by the manipulative influence of Poison Ivy, though eventually they patch things up in time to save Gotham.

The Dick Grayson Robin was an integral part of Batman: The Animated Series, particularly when the series was renamed The Adventures of Batman & Robin in its final batch of episodes. But when the series was revamped to become The New Batman Adventures, suddenly the Batman family dynamic changed. That follow-up series featured a slightly older Dick as Nightwing, with Tim Drake taking over as Robin.

The episode “Old Wounds” eventually explained what happened to drive Bruce and Dick apart. As it turns out, the final straw was Dick’s discovery that Bruce knew Batgirl’s secret identity and never bothered to tell him.

1986’s The Dark Knight Returns hinted at a major falling-out between an aging Bruce Wayne and Dick Grayson, but it wasn’t until the 2001 sequel The Dark Knight Strikes Again that it became clear just how dysfunctional their relationship is in this universe. Readers learned that Dick had become so traumatized by his experiences as Robin that he turned himself into a genetically modified, invulnerable serial killer who preys upon other superheroes. Batman had to toss his old ward into a magma pit just to be rid of him.

The 2003 Teen Titans animated series didn’t directly explore the complicated relationship between Batman and Robin very often. The series never even definitively revealed which particular Robin this was. However, the Season 5 episode “Go!” featured an exchange between Robin and a criminal opponent where the Boy Wonder made it very clear he no longer worked under Batman and wanted to be his own hero.

While Tim Drake remained Batman’s faithful sidekick throughout the ’90s Batman comics, he and Bruce hit a rough patch thanks to the debut of a new heroine named Stephanie Brown. Tim broke from his partner and mentor after Batman decided to reveal Tim’s secret identity to her. Stephanie even briefly took over the role of Robin herself before apparently dying in a storyline called War Games.

Tim and Bruce eventually patched things up, but their relationship was never quite the same. These days, Tim has taken the name “Red Robin” and operates largely on his own or as a member of the Teen Titans.

The Brave and the Bold

The animated series Batman: The Brave and the Bold featured Batman teaming up with a different DC hero in every episode, mostly because he didn’t have Robin’s help to rely upon. Several episodes focused on the rift between the two, revealing that Robin moved to Bludhaven and became Nightwing because Batman failed to treat him like a peer rather than a sidekick.

The Death of Damian Wayne

With Tim Drake shifting into the Red Robin role, Bruce’s son Damian became the new heir to the Robin mantle in the 2000s. Unfortunately, he befell the same fate of most Robins when he was killed in the series Batman Incorporated (by an oversized clone of himself, no less). Fortunately, Damian also followed the example of his fellow Robins by returning to life, but not before Batman went through a particularly dark and Robin-less period.

Freed from the constraints of traditional DC Universe continuity, the video game series Injustice: Gods Among Us has managed to push the Batman/Robin dynamic in some interesting new directions. In this universe, Batman leads an underground resistance against Superman’s regime, while Damian has become the new Nightwing and thrown his lot in with the Man of Steel. The prequel comic book explored how that split came about. It turns out that Damian accidentally killed Dick Grayson during a clash between rival factions, creating a rift between father and son that will probably never heal.

The 2015 animated movie Batman vs. Robin serves as a sequel to 2014’s Son of Batman, which introduced Damian Wayne to DC’s animated universe. In this film, the tense relationship between father and son is exacerbated by the rise of the Court of Owls, a secret society that has existed in Gotham since its earliest days. While Batman attempts to reconcile with his son in the end, Damian instead retreats to a Himalayan monastery for a bit of soul-searching.

No sooner did Damian Wayne return to life in the comics than his father was seemingly killed and Commissioner Gordon became a new GCPD-approved version of Batman. That paved the way for a new comic called Robin: Son of Batman, where Damian embarked on a globetrotting journey to make amends for his past as an underage member of the League of Assassins. Even though Bruce returned, Damian has largely remained a solo player or Teen Titans member rather than rejoining Batman.

None of the various Robins have appeared in the DC Extended Universe so far, but 2016’s Batman v Superman makes it clear there’s an unhappy history there. Ben Affleck’s Bruce Wayne keeps a defaced Robin costume on display in the Batcave, one that alludes to Joker’s terrible rampage a decade earlier. While most fans assumed this suit was once worn by Jason Todd, director Zack Snyder has implied that it was actually Dick Grayson. One particularly interesting fan theory suggests that Robin went crazy and became the Joker himself, though that doesn’t seem to be supported by the villain’s depiction in Suicide Squad.

The Death of Tim Drake

It seems like no one can partner up with Batman for very long before suffering either death or career-ending injury at the hands of his enemies, and it finally became Tim Drake’s turn in 2016. Tim was recruited as part of a team of Gotham vigilantes and tasked with serving as the group’s designated tech whiz. Unfortunately, the team’s first mission ended in tragedy, with Tim sacrificing his life to stop a devastating drone attack. Fortunately, it was later revealed that he had been teleported away at the last minute by Mr. Oz, a mysterious villain connected to Watchmen’s Doctor Manhattan.

Even in the happy-go-lucky world of Batman ’66, Bruce Wayne and Dick Grayson aren’t immune to relationship troubles. 2016’s animated spinoff Batman: Return of the Caped Crusaders proved as much. In this adventure, Batman is slowly driven mad by exposure to a substance called Batnip, turning him into a ruthless vigilante who kicks Dick and Alfred out of Wayne Manor and proceeds to clone an army of Batmen to patrol Gotham City. Fortunately, he eventually comes to his senses.

For more on the DC Universe streaming service, check out everything we know about the platform’s pricing and lineup, and read executive producer Geoff Johns’ explanation for Robin’s rift with Batman in the Titans trailer.

Jesse is a mild-mannered writer for IGN. Allow him to lend a machete to your intellectual thicket by following @jschedeen on Twitter, or Kicksplode on MyIGN.