Everything you need to know about Cyberpunk 2077.

Cyberpunk 2077 is an upcoming RPG from CD Projekt Red, based on the Cyberpunk 2020 tabletop game. It was announced all the way back in May 2012 as an open-world sci-fi RPG set in a dystopian California city in the year 2077.

There’s no release date yet, but we have compiled all the news, trailers, rumors, and gameplay details about Cyberpunk 2077 in the lead-up to launch.

Here’s everything you need to know about Cyberpunk 2077.

Cyberpunk 2077 gameplay has yet to be made public, but information from behind closed door presentations, trailers, and interviews with developers have confirmed a couple details. We also finally got our first substantial look at Cyberpunk during Microsoft’s E3 2018 press conference and the FAQ hidden in its debut trailer.

Cyberpunk 2077 will be an open-world sci-fi RPG powered by CD Projekt Red’s new REDengine4 and based on the world and lore of the 1988 tabletop role-playing game Cyberpunk 2020. Staying true to its source material, Cyberpunk 2077 will feature a great deal of character customization, classes, and a focus on high-tech upgrades and implants. The way players present themselves will have an impact on how NPCs treat them, according to Kanik.

After watching a 45-minute behind closed doors demo at E3 2018, we wrote about all of the details we learned including driving, character names, and more.

Shortly after Cyberpunk’s reveal at E3 2018, fans reacted negatively to the news of the game being playable mostly in first-person. Lead level designer Peter Gelencser reacted to the backlash in an interview, saying the choice to swap between The Witcher 3’s third-person perspective to first-person was implemented so players “can see things happening up close, and so you can really interact with things in a visceral manner.”

Additionally, we’ve learned Cyberpunk 2077 will feature diverse romance options, including NPCs spanning across the queer identity spectrum. The game will have no additional loading screens after the initial load, and developers are targeting a release on current-gen platforms.

Since E3, we’ve combed through the internet and read multiple interviews to learn other details, including whether or not you can drive flying cars or if Ciri from The Witcher will make an in-game appearance.

Cyberpunk 2077 is set in the fictional setting of Night City, California. 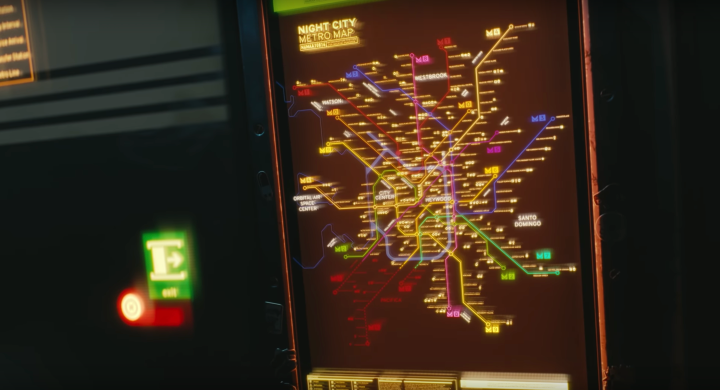 While we haven’t been shown a full breakdown the map yet, we did get a glimpse of its metro map in its E3 2018 first look trailer.

Here you can see every Cyberpunk 2077 trailer, gameplay video, and important reveal in one handy spot.

If you’re interested in following the story of Cyberpunk 2077 from initial rumors to its upcoming launch, we’ve compiled all the news, rumors, trailers, and announcements below, in mostly chronological order.

CD Projekt Red, the Warsaw-based developer of the popular Witcher series, first began dropping hints about its new sci-fi RPG in May 2012. Back then, we knew CD Projekt was working on two new games – according to job listings on its official website, one was an “RPG in a dark fantasy world” and the other an “RPG in a brand new setting.”

The “dark fantasy” RPG ended up being, unsurprisingly, The Witcher 3: Wild Hunt. But the second game – distinguished only with a handgun icon – was up in the air.

“We’re looking for people who would rather work on an entirely new and different IP – a vast RPG for which we want to assemble the best possible staff,” wrote the job listing.

Not long after, CD Projekt Red released a teaser image showing off its new RPG’s sci-fi roots, with more details promised for CD Projekt Red’s Summer Conference at the end of the month.

As expected, CD Projekt Red officially announced Cyberpunk 2077 on May 30, 2012 during its Summer Conference. Then simply called Cyberpunk, CD Projekt revealed that its upcoming RPG would be an adaptation of Mike Pondsmith’s 1988 tabletop role-playing game Cyberpunk 2020, with roots in cyberpunk staples like Blade Runner and William Gibson’s fiction.

Cyberpunk 2077 would also have selectable character classes and lots of high-tech upgrades, weapons, and implants to choose from, but further details were sparse.

News of Cyberpunk quieted down for half a year before it re-emerged in January 2013, first with a teaser image showing off a police badge from a Night City officer, and the next day with its very first trailer – a brief teaser showing a heavily augmented human whose high-tech modifications have caused her to go berserk and massacre several people using protractible scythes from her forearms.

MAX-TAC agents, also known as Psycho Squad, are the heavily armed officers responsible with combating exactly this type of violence, and are shown riddling her with bullets that barely leave a dent on her skin.

A New Engine and New Details

For a long time, CD Projekt Red only provided small pieces of information about the status and development of Cyberpunk 2077.

A few months later, an interview with game director Mateusz Kanik revealed several details on how the idea for Cyberpunk 2077 came to be, and CD Projekt Red’s unique approach to the material. Kanik explained, for example, how players will be able to customize their character’s look, and how their style of dress may influence the way NPCs treat them.

“It’s about telling story via what happens, not cutscenes or other features,” Kanik said. “To do that we need to create a totally new unique dialogue system – we’re doing that right now, it should be awesome.”

In July, a presentation at SIGGRAPH 2013 revealed that Cyberpunk 2077 would be played in a mix of first- and third-person. At New York Comic-Con in October 2013, Rafal Jaki – business development manager at CD Projekt Red – told Polygon that Cyberpunk 2077 would most likely come to next-gen consoles (now referring to the PlayStation 4 and Xbox One), but that it was “too early” to confirm or deny.

While Cyberpunk 2077 was missing from E3 2014, we did hear from it again in January 2015, when Michał Platkow-Gilewski – director of PR at CD Projekt Red – confirmed Cyberpunk 2077 was still in development, but that all resources were being focused entirely on The Witcher 3: Wild Hunt (which had been hit with a handful of delays) for the time being.

In May 2015, CD Projekt Red CEO and president Adam Kiciński told Reuters that the studio would not speak about Cyberpunk 2077 again until 2017 while they focused efforts on The Witcher 3 for the next couple of years. But as it turned out, CD Projekt Red didn’t go completely silent.

Joint CEO Marcin Iwiński and Platkow-Gilewski spoke to IGN at E3 2015 about why they released the Cyberpunk teaser so early in development, and in October, visual effects artist Jose Teixeira spoke to MCV about how Cyberpunk is “far bigger than anything else that CD Projekt Red has done before.” That’s a sentiment we heard echoed again this year, when Kiciński told PC Gamer that “Cyberpunk is [their] new Witcher 3, but even more ambitious.”

A rumor from Gamereactor Germany spread in December 2015 that “a source close to [CD Projekt Red]” claimed the studio was planning to launch Cyberpunk 2077 in 2016. That, as we know now, was false.

In June 2017, CD Projekt Red penned an open letter to fans revealing that several Cyberpunk 2077 game files and documents had been stolen by an unidentified individual, and that the material was being held ransom. In the letter, CD Projekt Red stated that they would not be giving in to monetary demands and ensured fans that the documents were old and, if they should be leaked, should not be taken as representative of the studio’s current vision for the game.

“When the time is right, you will hear about Cyberpunk 2077 from us  – officially,” wrote the team.

Besides a few peeps here and there – a Twitter update that Cyberpunk is “progressing as planned,” a clarification that Cyberpunk will not have hidden microtransactions, and word of CD Projekt Red opening up a third studio to aid development – news on Cyberpunk was relatively quiet between its big document leak and the first few months of 2018.

Then, in late March 2018, we got our first hint that Cyberpunk 2077 could be at E3. At CD Projekt Red’s financial results conference, Kiciński replied to a question about what the studio would show at E3 with, “We haven’t announced that yet. We will announce it just before.”

Fans took that to mean they would show something, as they could have just as easily said they aren’t showing anything. Kiciński did provide at least one piece of substantial information about the upcoming game, notably that it would launch as a single-player experience like The Witcher series. However, Kiciński didn’t discount the possibility of multiplayer.

The best confirmation yet that Cyberpunk 2077 will be at E3 2018 came on April 30, 2018, when the official E3 2018 exhibitor directory listed CD Projekt Red in attendance with an unspecified RPG for PC, PlayStation 4, and Xbox One. Check out our wiki for a full list of games at E3 2018.

At the very end of Microsoft’s E3 2018 showcase, we finally got our first real look at Cyberpunk 2077 via a surprise reveal trailer.

While the trailer contained no gameplay, we combed through the footage that was revealed and cross-referenced it with the things we saw during the behind closed doors live gameplay demo during E3 2018. Check it out in the video below:

Six years after its announcement, one of Cyberpunk’s developers commented on the reason for the long development cycle, reassuring fans that the delay has been due to the team wanting to do its very best with this new IP.

Cyberpunk 2020’s original creator Mike Pondsmith visited IGN’s offices, running us through a brief campaign of the original pen and paper RPG and answering some of our burning questions. During these interviews, he explained more behind Cyberpunk’s unique “cool” stat, and at E3 he revealed how many people approached him about the Cyberpunk license prior to CD Projekt RED and expressed his hopes that fans will be patient with developers to create the game they want to make.

During Gamescom 2018 in Cologne, Germany, developer CD Projekt RED showed off all new Cyberpunk 2077 screenshots and concept art giving more of a look at the game’s highly detailed world.

While there is no current release window, those interested can preorder Cyberpunk 2077 now on Amazon.