Axe is one of the red hero cards in Artifact. It’s considered one of the strongest heroes of the color and in the game overall, which makes him a core hero to play in a variety of red decks. 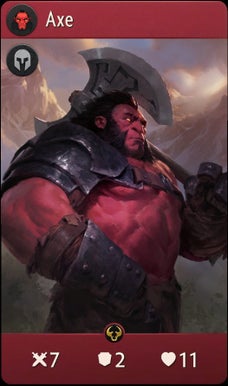 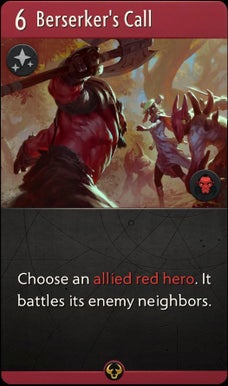 Many Artifact players will name Axe the strongest hero in the game and with good reason. The hero comes with a formidable stat line and brings a unique tool to the red color, his power rooted in several key aspects.

That said, Axe is a no-brainer addition to red decks, as none of the other heroes with the exception of perhaps Legion Commander, offer such value for money. Axe remains as the best hero in the game to have on the “flop” (that is — the initial deployment phase), because he can’t be killed “for free” or in fact easily chased away.

The statline of Axe alone makes him a top of the line hero, but where he truly shines is Berserker’s Call, his signature card. Berskerker’s Call value comes from it breaking the design norm of its color. Red is made to rely on strong heroes and effective statlines moreso than spells. Red wants to win by trial in combat, not by playing cards in the action phase and removal cards — and especially area-of-effect removal cards — are reserved for blue and black.

Berserker’s Call manages to turn red’s best asset (strong heroes) into a two-for-one killing tool. At times, Berserker’s Call will be even more powerful than Annihilation, Eclipse or Chain Frost, opening attack lines while crippling the enemy board.

Due to how powerful he is as a body, Axe doesn’t have direct counters, as in there is no single strategy that directly cripples the hero. However, there are many ways to get him out of lane or circumvent him and from there to win the game.

Axe best shines in proactive decks, meaning ones that like to go on the offense and thrive in combat.

In the current constructed meta, there are a number of decks that use Axe on the flop.