Here’s what seems to have gone down. Two individuals were playing Call of Duty and got into an argument online over a game with a $1.50 wager. One of them, a person with the Twitter handle @SWauTistic, threatened to swat user @7aLeNT. The latter then provided an address that wasn’t actually their own in response to the threat. Shortly thereafter, @SWauTistic allegedly called in the false report, which led to a police response at the provided address. Andrew Finch, who lived at the address, reportedly went to the front door in response to the commotion and was shot. “As he came to the front door, one of our officers discharged his weapon,” said Livingston. The police haven’t said whether Finch had a weapon at the time, but his family has said there were no guns in the house. The officer who fired the shot is a seven-year department veteran who will be put on paid administrative leave pending an investigation.

Once the story began attracting media coverage, @SWauTistic tweeted that the house he swatted was on the news, which was then followed by a tweet saying he didn’t get anyone killed because he wasn’t the person who shot Finch. 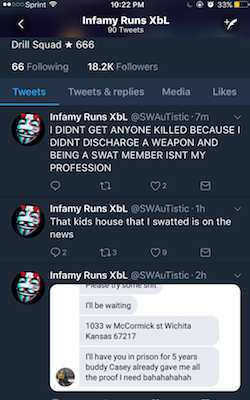 KrebsOnSecurity reports that the individual then changed his Twitter handle to @GoredTutor36, but not before KrebsOnSecurity got its hands on weeks’ worth of the original account’s tweets. The person behind the account has claimed credit for a number of swatting hoaxes and other threats including one that led to the evacuation of the Dallas Convention Center earlier this month, a bomb threat at a Florida high school in November and the threat that caused the FCC to pause its net neutrality vote a couple of weeks ago.

In direct message conversations with KrebsOnSecurity, the person running @GoredTutor36 said that they had remorse over Finch’s death but that they would not be turning themselves in. “People will eventually (most likely those who know me) tell me to turn myself in or something. I can’t do that; though I know its [sic] morally right. I’m too scared admittedly,” they wrote. They also said, “Bomb threats are more fun and cooler than swats in my opinion and I should have just stuck to that. But I began making $ doing some swat requests.” The person also noted that the thrill of such hoaxes “comes from having to hide from police via net connections.”

Finch was a father of two children — a two-year-old and a seven-year-old — and his family said he didn’t play video games.

Update: The Wichita Police department has confirmed this is an incident of SWATting, and released material including audio of the phone call that sent officers to Finch’s door and video of what happened when officers arrived. According to the police, their investigation is ongoing, however they noted that the caller continued to contact 911 even after the police had arrived on the scene.